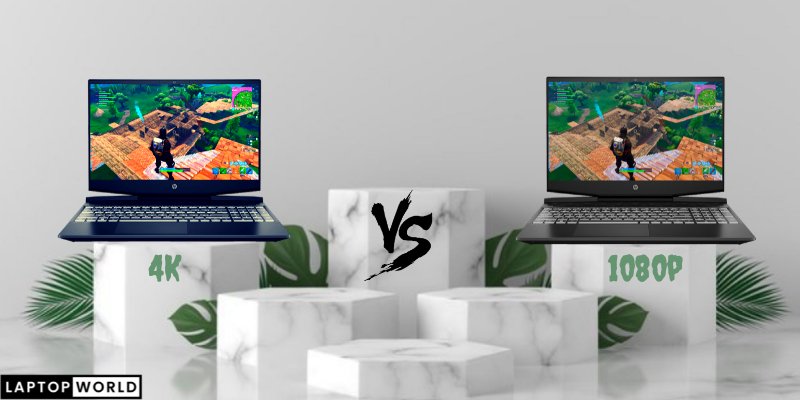 So you are someone that has either come across a wide variety of laptops with variable screen resolution and don’t have an idea how they work and what’s the difference between them or a display enthusiast who feels indecisiveness to choose from 4k vs 1080p laptops or a UHD vs FHD laptop.

Well if that isn’t the case here but you just want to know the differences between these two, keep on reading this article on what sets them apart and what are their advantages and flaws in both gaming and movie-watching experiences.

But before I shed some light on this topic and explain each. An optimal aspect by comparing both of these resolutions, we need to have a general understanding of what a screen resolution is from scratch.

Although it might look, there is a whole lot of logic that goes behind these two which is firmly based on the pixel density, which I will explain in this article.

What is a Display Resolution?

A resolution is the number of pixels that are present in both vertical and horizontal dimensions at any given time which bind together to form a picture or a video in a multimedia device such as a laptop or a desktop.

There are many forms of resolutions that follow an aspect ratio ranging from 4:3, 16:9, and 16:10 being the most common and acceptable form used in standard commercial cinematography.

The Formula of Resolution

In simpler words, the resolution of a 4K laptop is 3840 x 2160 where 3840 represents the Horizontal pixels, while 2160 holds the value of the vertical dimension of pixels which forms a complete picture that is displayed to your eyes.

Now that you know what a resolution is, let’s take a look at the in-depth details about their advantages and disadvantages.

Now the question that arises here is, is a 4K laptop worth it? Let’s discuss some pros and cons of 4K resolution.

Following are some of the noticeable advantages of 4K resolution.

Good for watching movies and projectors:

As mentioned above, this sort of resolution is fit for cinema standards and is perfect for watching movies. Moreover, watching movies on a projector or home theater looks and feels superb by delivering you the premium studio experience at the comfort of your home.

The colors are much more in detail and there is plenty of clarity in picture quality, moreover, zooming in on pictures and videos doesn’t feel hazy and there is almost no pixelation due to the heavy density of pixels in each dimension.

An optimal choice for video and picture editing:

Video and image editing software like Adobe Premiere Pro and Adobe photoshop tend to work better when you are using images that have higher resolution than a 1080p resolution where you can examine each aspect of your imagery without missing a detail.

Since the output of imagery has vibrant colors, it is much easier for you to edit and tune in your colors giving you full control over your editing software.

Just like every other platform, YouTubers have also started to elevate their game by recording their videos in higher quality resolution such as 4k and if you have a laptop that doesn’t support 4k resolution, you might as well be missing the magical side of the higher quality imagery.

Following are some of the noticeable disadvantages of 4K resolution.

As much as the higher resolution feels tempting, 4k laptops tend to cost twice as much as regular FHD resolution laptops. This is why plenty of consumers settle for a 1080p resolution due to being on a budget.

Not fit for gaming:

Besides only being limited to a 60hz refresh rate, emulating graphics at 3840 x 2160 will also require much more expensive hardware, such as graphics cards and processors.

Moreover, the 60hz refresh also enhances input lag which is not suitable for competitive gaming, where a higher refresh gives you a competitive edge over your opponent.

A UHD resolution has 8,294,400 Pixels which requires much more power to emulate the graphics to the viewer’s eyes which in return drains the battery at a much faster pace while making the runtimes of laptops with 4k resolution horrendous.

Following are some of the noticeable advantages 1080p of resolution.

In contrast to the UHD display laptops, they come with much lower price tags and don’t put a strain on your pocket. This is why they are highly preferred by individuals that want a budget-friendly option without spending extra bucks.

4k resolution laptops are marginalized for today’s standard which is why they are often rare to find, on the other hand, there are plenty of options in the market to find laptops with FHD display due to the high ratio of availability.

Although 1080p resolution laptops might not have a higher density of pixels, they often have a higher refresh rate that ranges from 120hz to 240hz which minimizes input lag and screen tearing and is highly suitable for fast-paced action games.

Following are some of the noticeable disadvantages 1080p of resolution.

Not fit for image editing:

1080p laptops have 4 times lesser pixels than UHD resolution laptops and working on them while using video editing software isn’t an ideal choice, leaving professional video editors and freelancers at a higher disadvantage.

Because they are left with lesser pixels to work with which makes the video results extremely poor while viewing it on a projector or higher resolution due to haziness and pixel tearing.

While it is still an acceptable form of resolution to enjoy movies, a 4k resolution laptop delivers a much more pleasurable experience that can be achieved on a 1080p display.

Can you tell the difference between 1080p and 4K on laptop?

Anyone who knows a little about displays or is an enthusiast will notice the differences in quality immediately between 1080p and 4k displays.

Is 4K overkill on a laptop?

People who work on graphics design or video editing will know the importance of a 4K display and will definitely not consider an overall display but rather a utility that can help improve productivity.

Which is better UHD or FHD?

Ultra High Definition is a far superior choice to Full HD options as it has denser pixels and more color vibrancy as compared to the latter.

Good premium-grade laptops with higher resolution screens usually come with a hefty price tag while FHD resolutions such as 1920 x 1080p have a bigger refresh rate and don’t drain the battery as fast.

It is up to decide which option is suitable for your needs. If you are a professional editor, I would advise you to go for a bigger display. However, for gamers, 1080p is the sweet spot.

That being said, take a gander at my brief description of 4k vs 1080p laptops to eliminate all indecisiveness you might have, and feel free to let me know if you have anything on your mind.