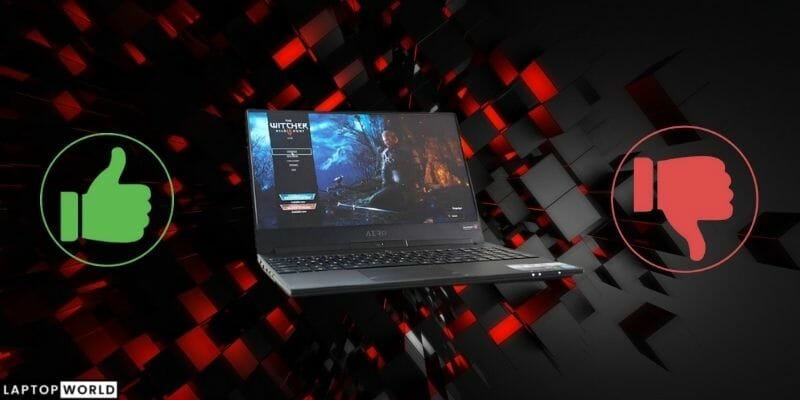 “Gaming laptop” is now sort of a stand-in term while talking about some mighty (powerful) computers. These laptops are indeed the ultimate go-to options while one’s looking for a solid machine. And the reason is their strapping hardware, foxy form-factors, lots of advantages, and a pretty few disadvantages.

With that said, the much crazier ad realistic game debut with each new daybreak today also plays a major role in amplifying this market.

These new launches not only seduce the gaming freaks but all those non-gamers too. Resultantly, everyone wants to get a gaming laptop to try & place new bets and to have all the needed robustness on tap.

Still, with all these positives, there are some disadvantages of these laptops too. Yes, for we know that everything (especially an electronic gadget) does have positives, but it comes with lots of worth to consider negatives as well.

So, while talking about and tallying the pros and cons of gaming laptops, I’d say one gets a 50-50 result. And, here’s all that in detail for you i.e. all about their plusses and minuses, in general.

Advantages and Disadvantages of Gaming Laptops

No doubt, there are stacks of gamers’ machines available in the market, some being heavily pricey and thus futuristic, whereas some being just lousy. And it all depends on how much you are willing to pay i.e. the higher the bucks, the more the advantages.

But by 50-50 – as mentioned above, I refer to those who don’t know much about gaming laptops i.e. specs, etc. And those who are, for the first time, thinking to shift to this verge. So, some of them could find it a profitable decision whereas, for some, it could be a foul.

For gamers, both who are either shifting from the console or the desktop gaming and everybody else, here are some of the advantages of gaming laptops.

For all sorts of gaming junkies, the desktop setup has always been ideal. It’s of course a whole lot of matchless fun having that rig but all the fun collapses when it comes to the portability factor.

So, yeah, for those 24-7 gamers, it’s a big plus. You do have the advantage of being able to set up your gaming rig wherever you are.

Well, most of the latest machines today are coming in an even more compact and cool form factor. So, even a student can now have it in his backpack daylong just like his other (students’) laptop.

Needless to say, almost every gaming machine displays some robust hardware and software. And more or less all these laptops come with the latest (available) operating system.

They pack some advanced processing systems i.e. 4-cored processors at the lowest extreme, otherwise mightier processors. Gaming laptops are abundant in memory and storage and often come with empty slots for RAM and SSD upgrades.

And finally, these laptops win when it comes to graphics processing. Unlike most regular laptops, these come with dedicated GPUs for a crispier graphics rendering. So that, you can fully immerse into each of your gameplay moments.

Hence, these machines are just beasts in their interior.

Gaming laptops are so well-systematic in power consumption and are believed to consume less power while charging. These machines devour 80-85% less electric (input) power as compared to a desktop setup.

So this is one other pro if you are a full-time gamer shifting from desktop gaming to laptop.

It’s oftentimes noticed that gaming laptops come with extended warranties by the manufacturer. As compared to other normal laptops, you can often find some solid (and substantial) quality pledges and repair promises in these machines.

Gaming laptops always win when it comes to the charm factor. These laptops feature some ultra-enticing, eye-catchy, and novel constructs. In short, they brag a clear edge in satisfying your looks-n-style craves and promise to add countless titles in your personality compared to their everyday counterparts.

And here ends the first section of the advantages and disadvantages of gaming laptops. So let’s get down to the second now.

Here are a few noteworthy negatives you can get with these laptops.

No matter what and how elite all other specs a gaming laptop boasts, the battery performance is often pathetic here. It’s one of the most disappointing things about these machines that nothing – neither the price tag nor the other components/specs, makes any noticeable difference when it comes to their battery performance.

It’s believed that no doubt these are some ruthlessly powerful laptops having each component upgraded to peaks. But, the battery in a gaming laptop is never at par upgraded, thus it often falls short of standards.

So, whether you go for a $1000 laptop or a $5000+ one, you’ll quite often get (just) an average battery. Perhaps good for other routine things but petty sub-par for your primary (gameplay) needs.

Unlike the desktop PC setup, gaming laptops don’t support any user customizations. You just cannot upgrade the processing setup i.e. CPU, GPU, etc. here, which on the other hand can be easily and frequently done with desktop PCs.

What at max you can do is just upgrade the RAM and SSD of the laptop. Because they often come with empty slots for user-desired memory and storage upgrades.

Seeing that, because every new game that unleashes demands some specific, usually higher than previous, specs i.e. mightier CPU, GPU, RAM, SSD, and latest OS, etc. Thus, if your laptop’s existing processing setup doesn’t tally with them, you just cannot upgrade it to meet those asking figures. But, to rely on the values put in by the manufacturer.

The only solution then is to throw away this one and purchase a new, more upgraded, machine.

With a gaming laptop, the most cumbersome thing to deal with is its heat and noise issues. Regardless of how latest the machine is or how innovative the cooling/heat-optimization mechanism it carries, if such a laptop is a bit overladen, it starts taking the chill off. And eventually, the intense the overheat issues, the more annoying the fans (noise).

I have no idea about the latest launches, but that’s what I know about these laptops being a gaming enthusiast. Perhaps the latest ones have got better in this department too, but that’s one known issue up here.

This is one other widely-admitted worry with gaming laptops. And it’s tried and true, indeed. These laptops, compared to the same caliber regular laptops, often hold biting price tags.

Well, it certainly needs to be, looking at the value for the price you get here. The price tag of a gaming laptop only and truly honors its internal competency as well as external charm.

Anyways, going for an entry-level gaming machine would need you to fritter higher bucks than you do (or you’ve ever done) on a non-gaming laptop. And for a pro-level laptop, I fear you don’t go bankrupt.

Gaming laptops do offer you the advantage of being able to pack and port contrary to a desktop setup. But, it’s also true that these are often not as easy to carry as most non-gaming laptops.

Where a normal non-gaming laptop weighs around 2 or 3 pounds, its same-caliber gaming twin will weigh around 4 or 5 pounds. Except a very few, almost every gaming laptop is way bulkier comparatively with a few in the line even weighing up to 8 or 10 pounds.

So, portability is no doubt promised here because whatsoever, these are laptops. But, these are not that easy to be carried everywhere all day long like other non-gaming ones.

What are the advantages of having a gaming laptop?

Is gaming laptop good for daily use?

The battery life isn’t as long as that of a traditional laptop, but this is still viable for your daily work routine.

Finally, first of all, I’m glad that my foretold statement i.e. a contest between advantages and disadvantages of gaming laptops always gives you a 50-50 result, showed up valid. Because the positives and negatives identified are so exactly at par with each other.

To sum up all the pros, I’d say that gaming laptops have just so finely replaced desktop gaming. These are just absolute rippers. The overall hardware, software, and functioning of these laptops, compared to the other everyday laptop is always a cut above in all aspects.

But, no doubt, all the positives are accompanied by some negatives too. In a gaming laptop, you get a limited screen size unlike in desktop gaming where there is a user-defined monitor adjustment. Plus, there are many other things too.

I’ve researched and discussed in detail the pros and cons of this laptop line above. Go and throw a look.