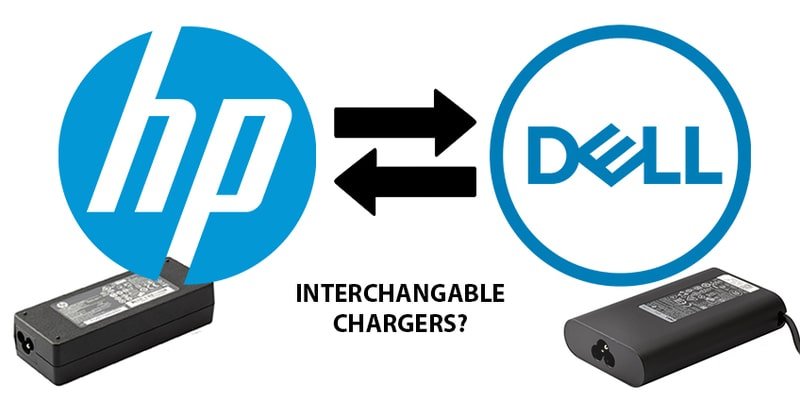 Laptop chargers are interchangeable provided that two things must match between both the parties – the wattage and obviously the barrel plug (connector tip). By both the parties, I mean that one power cord and those multiple laptops you want to share the cord among.

Table of Content
Are Laptop Chargers Interchangeable?
What Is Wattage?
Adapter Connector Tip or Barrel Plug
Universal Charger – The Perfect Answer to How to Use One Charger for Multiple Laptops
What If Even a Universal Charger Doesn’t Work for You? What to Do in That Case?

So, are laptop chargers interchangeable? Well, regarding their function, all adapters do that one same thing – converting the high voltages from outside to the optimal amount your machine actually needs.

That said, still, not every adapter is gonna work with your laptop. Because it’s not about whether the adapter is making sure the inflow of those ideal volts and amps (anything more or less from which would put your machine at risk). But because the laptop charger compatibility exclusively depends on those two things.

Well, yeah, if you are planning to use one charger with multiple laptops, you can do it – just make sure that the wattage and connector tip of each laptop match up with the two of the cord.

Well, simply put, wattage is the power requirement of the laptop. And obviously, that’s never the same for every laptop. While mine one stays happy at even less than 50W (because it’s a mini machine), your laptop would, perhaps, raise a hue and cry at anything less than 70W even.

So you can’t use my adapter to charge your laptop, right? Yes, every laptop has a certain amount of volts and amps required for its battery to get charged. And for the machine to stay optimally powered.

You can easily find out the exact power requirement of your laptop by just simply multiplying the laptop’s volts and amps. Turn your laptop upside-down and look for that sticker on its base. On the sticker, you’ll find the exact (power) input requirement for the laptop: volts (V) and amps (A).

If there is no sticker, you can check it out in your laptop’s user manual as well. Anyways, for my laptop, it’s 12V and 3A, which means it has a power requirement of at least 36W. And I can’t use a power adapter whose output is less than 36W.

Likewise, for a laptop with input requirements of 16V and 3A or 19.5V and 4A, the least required wattage is 48W or 78W, respectively. Although you can use the adapter with a higher wattage, say a 90W adapter for a 50W or 60W requirement, you can never use one that has less output than the minimum input required.

Even if you use an adapter with the same output as is the input wattage required i.e. 78W adapter for a 78W laptop, that’s also not ideal. You must always go for an adapter that has a higher wattage than the least required for your laptop (more the amps, faster will be the charging).

Say you have calculated your laptop’s wattage requirement and have purchased the best adapter for it as well. But what if when you try to plug it in, and the laptop simply refuses to accept it? Far be, but if that happens, there is a conflict between your cord’s connector pin and your laptop’s charging jack.

Well, different laptops come with different connector shapes and sizes. Even two laptops from the same brand and manufacturer can feature different and distinct ports and connector tips.

One laptop may offer a small round jack and thus accept the corresponding small and round connector tip. Whereas, the other would perhaps be seating a large size oval-shaped charging aperture and so on.

So that varies, and you ought to be watchful of this while getting a charger for your laptop. If the cord’s connector tip is not getting perfectly clued up despite that it’s of the same size and shape, just never force it for this.

Because forcing a wrong adapter connector to plug into the laptop’s jack would ultimately damage both or at least one of the two things.

Look for Polarity as Well

Like the connector tip, the polarity of both i.e. the adapter and your laptop also needs to correspond. It’s usually shown by a diagram consisting of three circles – a plus and a minus sign on both extremes and a bold C-type circle in the middle.

If the plus (+) sign is on the right and minus (-) on the left, the adapter is said to have positive polarity. And vice versa for the other case.

Anyways, check out the laptop’s polarity too by looking closely at the area near the charging jack. You’ll see the same three-circle diagram thither too.

Now, whenever you plan to get a new charger, due to whatsoever reason, keep in mind those polarity sequences. Because in case of any conflict between the polarities (with the new charger), you can face issues ranging from a single fuse breakdown to some other serious damages.

A universal charger frees you from all the hassles of struggling with and managing plenty of adapter connector tips, etc. If you have multiple laptops and you want all of them to share a single charger, a universal charger is what you actually need.

Universal chargers are chargers with, as usual, one cord but a variety of interchangeable barrel plugs (the part that fits into the laptop – the connector tip). So you get that edge of using a single power cord (one charger) to charge multiple laptops at once. All you need is to simply apply the appropriate connector tip to the cord while charging a laptop.

Yeah, make sure to do this one thing beforehand i.e. check out the power (input) requirement of each of your laptops. Then, apply that formula and calculate the wattage for each of your machines. And finally, find out which laptop has the highest wattage requirement.

Now just go to the market and shop for a universal adapter with a higher wattage than that most power-hungry laptop. So if it has the power to charge that one, it’s sure able to charge all your laptops there on your desk.

Well, still keep one thing in mind. Although universal chargers come with a vast array of connector tips (do get one with a large number of tips), you’re still not far from hitting disfavor. There may not be a connector tip for every system (every connector jack) you have.

But this usually happens more with those older systems, older laptop models. So if your range of laptops doesn’t have anything from your father’s or grandpa’s times, there is no chance universal charger will disappoint you.

What If Even a Universal Charger Doesn’t Work for You? What to Do in That Case?

At times, when the company-packed (OEM’s) charger conks out, the laptop just refuses to accept and collaborate with any substitute. Not even a universal charger, that had to do it anyway, then work with (and charge) your laptop.

Yeah, this does happen, and there are many different reasons for this. So let me discuss a few below.

#1. The Smart Tip Technology – Chips in Battery and Adapter to Communicate

These chips communicate with each other when the charger is connected to the device. Now, say, you are on one latest Dell or HP system that flaunts this technology. So once you connect the charger to the laptop, a signal is straight away received at the device’s end: yeah, it’s the correct charger; go on charging.

On the flip side, if you have connected a non-OEM charger, the laptop will immediately tell you that the charger connected is wrong (or not appropriate). And thus, there won’t be even a single percent charge inflow to the laptop.

In such cases, there is no other way out but to get an original OEM (original equipment manufacturer) charger. Because no matter what you do, a non-OEM charger is never gonna work for you.

Otherwise yeah, if you have older laptops, those with no such technologies, there is no chance a universal charger won’t work for you. But if it still shows issues, then here is what else you can try.

If there is no such technology in your laptop(s). And if you are 100% sure that a universal charger is gonna work for you, but it still doesn’t, there may be some other issues waiting for a troubleshoot.

First of all, check your power adapter if it’s all fine at its working or not. Check out if it’s alive and ensure the flow of energy required for your system(s). Try it out with each of the laptops; try checking it up with batteries taken off as well.

Seek for any issue with your charger’s connector tip or the laptop’s jack, etc. And if everything is fine, try updating your OS or BIOS settings. It could perhaps help your laptop recognize the new hardware and accept it.

Closing – What About the Next-Level USB-C Chargers? Are Laptop Chargers Interchangeable?

The advanced USB-C charging has just completely redefined this whole thing. While Apple has made this a normal thing and almost every Apple machine features USB-C charging, most of the advanced Windows laptops are also stepping into the era.

USB-C charging is much more universal and we are very near to witnessing a whole next level of laptop chargers’ interchangeability, etc. With this, now you can have only one charger for both your phone as well as all your laptops that sport USB-C charging.

You just need to make sure that if or not the wattage offered by your charger is supported by all your (USB-C) laptops. If you get Yes in the answer, throw out that kinky box of your numberless chargers without waiting for a second.

Anyways, if you are still confused with the thing out of the USB-C’s scene i.e. about all other chargers, and thinking “are laptop chargers interchangeable?“, I’m sure you have skipped over the article. If so, must give it a scroll up. It’s just a one-minute read yet it’s gonna solve all your laptop-charger compatibility issues.