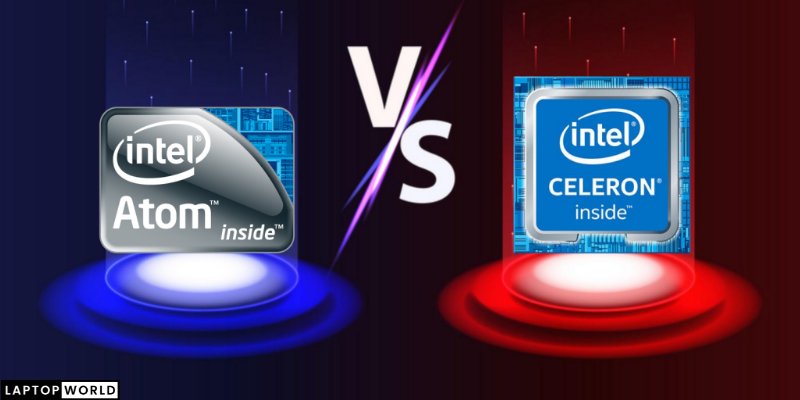 Both Atom quad-core and Celeron dual-core are low-tier processors meant for low-end mobile devices and laptops. However, being a quad-core processor, the Atom takes an edge over Celeron in performance. That doesn’t mean that Celeron processors are a lost cause. Actually, they provide value for money more than Atom. They produce decent and excellent performance but also do not cost a fortune.

Let’s look into these claims in-depth in case you want more information about Atom Quad Core Vs Celeron Dual Core.

These processors are a thing of the past, to be honest. In fact, after 2016, you’d rarely see any device carrying it. However, if you could find it on any device and you wish to buy it, do it by all means. The processor series give away decent performance.

The devices you’d be buying would be discontinued mobile phones and notebooks. Since they are obsolete, you may find working on some apps and software hard as they are not supported anymore.

Unlike the Core series, they don’t have an “i” in their designation or names. Instead, they have an “x”. The processors that are worthy of your consideration are x3, x5, and x7.

You should also know that other prefixes before their series number indicate which devices the processors are for. For example, the E in E43423 means embedded systems. If you see a C then that denotes mobile devices but Z is strictly for the mobile devices altogether.

The Most Powerful Processors of Atom Series

All the series, including the X3, X5, and X7 further come with their own series of processors.

All of the X3 lineups are not even worth considering because of their low clock speeds. Modern mobile phones don’t even come with these speeds. They are above 2 GHz. That’s because of the demand for better and speedy, not to mention power conserving, processors to meet the requirements (or should I say ever-growing requirements) of apps.

The caches in all of the X5 and X7 series are only 2MB with the X3 even low with 1MB. So, you can guess why I told you to discard the X3 completely – this is one of the reasons.

If you really have to go for Atom processors, then choose between X5-Z8500 and X7-Z8750. These two are the most powerful processors in Atom.

Intel Celeron and Pentium are newer than the Atom and they both are relevant even today. In fact, the Celeron takes an edge when it comes to being the value for money. How? They are cheaper but they do pack performance. Some of the processors in the series edge closer to the performance of the Pentium series.

Except for this, one of the main distinctions between the Atom and Celeron processors is that the latter is purely made for small or low-end laptops such as Chromebooks.

One of the most popular processors that have been used today by manufacturers for their notebooks is the Intel Celeron N4000. There’s N4100 and it’s a quad-core powerful processor. But as I said, the most popular one is the N4000. For high-end desktops, Intel Celeron J4005 with 2.7 GHz max speeds and G4900 with 3.1 GHz effective speed have also been released.

As per some benchmarks, the N4000 even takes Intel Core i7 9th generation when it comes to value for money. It has a CPU mark of 1400 and when you divide that by the total price of $107, you get cheaper cores per price point.

That value is just below the Core i7 7th generation.

So to say, if you buy a laptop with this processor, you may get more power for the price you pay. However, I know that it isn’t that much. You cannot compare that with the likes of Apple M1 8, for example.

Is an Atom processor better than a Celeron?

As the name suggests, Intel Atom is more power conservative as compared to the Celeron series because their max boost frequencies are quite low causing lesser battery strain to begin with.

Is quad core better than Celeron?

Celeron was inferior processors that were initially integrated into low-end laptops and computers to cater to budget users. Quad-Core, on the other hand, is simply more robust and offers far more max boost frequencies to the users that perform CPU-intensive tasks.

Are Intel Atom any good?

Yes, as long as you don’t mind slower speeds and have a tighter budget, Intel Atom will do lightweight tasks just fine. They are also quite powered conservative, so expect bigger battery runtimes, which is always a plus!

I will go with the Intel Celeron N4000 at all costs if I don’t have the budget to buy a powerful upper-tier laptop. That’s because it is a newer technology as compared to the Atom processors. The laptops and notebooks available with this chipset work extremely well for day-to-day tasks such as browsing on Chrome, doing small edits, and streaming content.

Yes, it is a bit expensive but seriously, why would you pay $37 or $27 for outdated processors when you get Celeron for $107. We hope that now you are well aware of all the information about knowing about the comparison of Atom Quad Core Vs Celeron Dual Core.