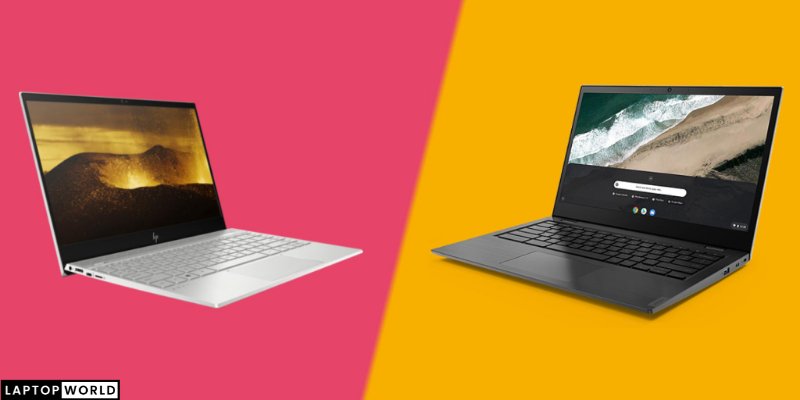 Laptops are robust and equipped with high-end hardware, whereas Chromebooks struggle when confronted with CPU-intensive tasks. Therefore, I don’t see how Chromebooks can replace laptops in a practical way.

You might be familiar with Chromebooks, the nifty laptop which was initially made by Google so that it can run android applications, mainly Google Chrome, Gmail, and Google drive.

Their strongest selling point is the fact they are designed to be extremely lightweight so that they can be used as a hybrid of both laptop and smartphone without weighing you down.

But when it comes to the fact “can a chromebook replace a laptop” or that it is it viable enough to replace it so that you can use it for your everyday purposes, the answer becomes a little tricky.

Because despite the fact that they come under the tent of laptops that are super budget-friendly, they aren’t made for everyone and presents plenty of issues if you actually do try to use it instead of a laptop.

Can A Chromebook Replace A Laptop

To further elaborate and shed some light on the fact that Chromebooks cannot replace your standard laptop, I have briefly highlighted some viewpoints.

Keep in mind, this article in no way, shape, or form tries to disapprove, refute or reject any of the features provided by a Chromebook, and this article is solely written for comparison purposes.

I have personally used a couple of  Chromebooks and feel like they provide plenty of convenience to their targeted audience, however when it comes to the replacement of a laptop, there is visible evidence that Chromebooks fail to do so.

While laptops in themselves weren’t designed to be used as a gaming device, they have come along to be shipped with high-end hardware.

A high-end graphics card can be used to play games on it through its integrated or dedicated graphics and allows users to take a break from daily routines such as office work or school work.

For Chromebooks, the story is surely a little different, they are nowhere near feasible to be used as gaming machines because they have pretty low-end hardware built into them.

Which is engineered to be energy efficient with minimal power input requirement due to underclocked mobile processors and other crucial parts.

This attribute makes gaming on Chromebooks almost impossible, so gaming is totally out of the equation, except if you want to play some low-end android games.

Since higher-end Chromebooks are only made for lightweight tasks, it is virtually impossible to use video editing or rendering applications, repealing any artists that are looking to buy a budget laptop.

On the other hand, a laptop can reap plenty of benefits because nowadays even a mid-range laptop can come with multiple Core CPUs as well as massive hard drive space capacity.

And you can use the hard drive to store your precious videos, images, data files such as projects, meeting minutes or simply to preserve your memories.

While Chromebooks do come with expandable onboard storage capacity options through SD card slots, they aren’t quite viable because they tend to have very slow speeds and transfer rates.

3. Limitation Due To Operating System

Hey, the Chrome OS is fine and dandy and works too well for its implemented purposes due to its awesome optimizations levels.

However, after a while of usage, you will feel very restricted because it has limited support for applications and if you are a fan of windows, you will surely hate using the Chrome OS.

Despite the Chromebook’s ability to install Android applications that you have on your smartphone, you are pretty much limited to using a couple of apps due to its limited internal storage space that is already taken up by the cloud-based operating system.

Going through a rough patch with no internet can be pretty boring, however, you can still use your laptop to watch a couple of movies or do other tasks.

The Chromebook heavily relies on the internet because most of the applications that are installed into it are Web-based and using them without having a steady internet or WIFI connection can render it pretty much useless.

So if by any chance you do want to buy a high-end Chromebook you might need to make sure you have decent internet available to you at all times.

Getting to the bottom line, as mentioned above, a Chromebook in itself is an amazing piece of device which has plenty of decent attributes such as long-lasting battery life which can provide you power for more than a day without having you keep searching for a power outlet.

It is also incredibly lightweight and thin and the overall quality is quite serviceable if you compare it to a laptop that comes under the same price range.

However, can a Chromebook replace a laptop if you ask me? Based on my experience, a laptop is far superior to a Chromebook and can reap plenty of benefits.