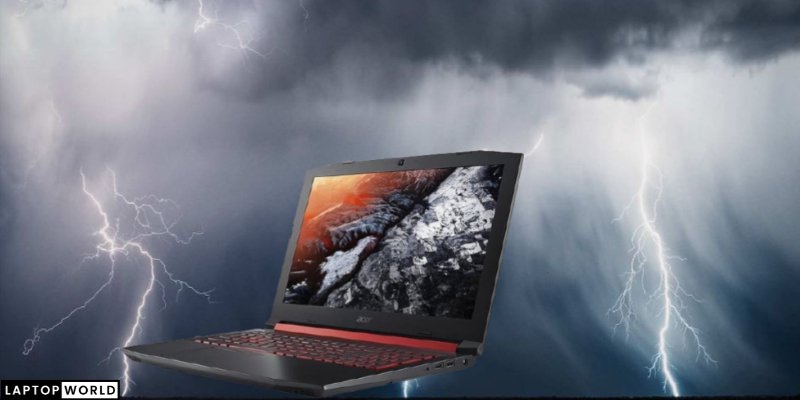 Lightning storms encourage fear among the masses and that’s understandable. All that noise and lightning can take you back if you’re not aware of the science behind them. Questions like can we use laptop during lightning arise. As I said, that’s perfectly okay to ask. Let’s answer this question with a scientific background.

Lightning is caused because of the difference in the charges between the clouds and the ground. That difference provides a pathway for the charges to move.

Although most lightning occurs right in the clouds because of the same phenomenon, the ones that reach the ground are stronger. It is as if the charges prefer the ground more than the clouds.

The sounds associated with lightning also have a scientific background. Whenever light strikes the ground, it heats up the surrounding air more than the sun itself. That’s about 6000 degrees.

When that happens, the hot air rises, and this flash of warming and rising sends vibrations through the air. Those vibrations produce deafening sounds we call thunder.

The impact of lightning on the ground

Whenever light hits the ground, it is discharged – meaning it loses its charge to the earth. The earth’s surface has the ability to absorb charges regardless of its medium. It can take charge of any amount without any apparent change in its structure or composition.

So, whenever light strikes the ground, it does nothing to it. However, if it strikes objects like trees and people, things get ugly.

It all comes boiling down to whether that object is grounded or not. For example, a tree is well grounded but it has water inside. When light strikes it, the water evaporates instantly because of the heat, thus cracking the tree with a great force. The same is the case with people. We have blood and neurons in our bodies that conduct electricity.

It is estimated that around 2000 people are killed each year by lightning. However, you don’t need to worry as your chance of getting in its way is far too less. There are 7 billion humans living on this planet, after all.

The impact of lightning on your house

Much like other objects, your house is also grounded by gutters, wires coming in and out of it, and dedicated poles (in some areas). If ever in your life lightning strikes your house, it would go straight to the ground without harming you or anyone else in the house – or even the house itself.

There’s a catch, however. You must not touch a pipe, water, or anything that conducts electricity when this happens.

And that brings us to our original question. What about using a laptop during lightning or watching TV?

Whether you can use machines during a light storm or not boils down to whether they are plugged or not. In a lightning event, the cords connecting you to the electricity also take a toll. Everything receives a jolt of light before it is quickly lost. That jolt could either damage the machine or appliance or it could cause harm to the people using them.

Therefore, always be careful when you’re using machines or appliances during a thunderstorm.

Here’s what you can do

Wireless connections come into the unplugged category. That means you don’t have to worry about getting electrocuted by your WiFi, for example. Or, you don’t need to fear getting a shock from your phone.

These things are perfectly isolated from the whole debacle. So, even if your house is struck by lightning, they will remain safe unless and until you plug them into the electricity source.

Consider plugging things as extending the influence of the charges that would run through your house.

You can use your laptop in a thunderstorm

All of what I shared with you above is true for your laptop as well. If you’ve connected it with a socket, remove it immediately during a storm. If you think lightning has struck your house, do not touch your laptop if it’s plugged.

Otherwise, use it any way you want because lightning doesn’t strike laptop batteries. The charge difference between them is not high enough to cause the electrons to hit them – and they’re small, so they’re very unlikely to get the treatment trees to get.

Can you use the internet on your laptop during a thunderstorm?

Again, the possibility of getting one hell of a shock by using the internet on your laptop depends on what type of connection you have. A cable connection, no matter fiber optics or copper, is still susceptible to conducting charge into your laptop. So, if you’re using that connection, you might wanna unplug during a thunderstorm.

As for using the WiFi, there’s no harm at all. You should not worry about that as charges cannot piggyback the WiFi waves.

Can you use your laptop in your car during a storm?

The tires of a car conduct electricity to the ground, thus, making it completely safe to be in a car during a thunderstorm. However, make sure to park at a safe place and turn off the ignition. Inside, if you wish to keep a check on the news, you can play the radio or use your laptop worry-free. The lightning will not strike your car as there’s very little chance.

Lightning or thunderstorms occur everywhere and there are some myths associated with it. Please do not believe in those myths. Do not panic during a storm but keep your family from all types of sockets, wired connections, water from faucets, walls, and other metal pipes.

And can we use laptops during lightning? Yes, we can.