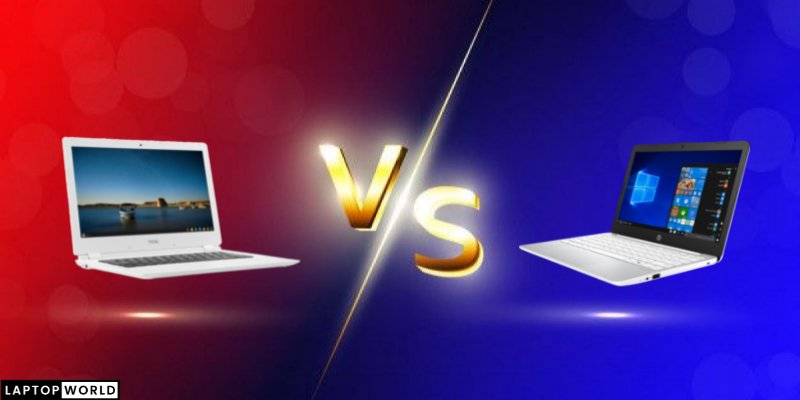 Chromebook vs Streambook is a question asked by many these days. Both of these laptops work really well for people with small needs for online work and study and watching movies, etc. Both of them are lightweight and stylish. Both of them cost way less than any traditional laptop out there.

If both of them are similar in many ways, then which one to buy and why?

I’ll address this in this article based on their collective and separate features. I’ll also state the pros and cons of owning any of them.

To make a comparison between any two things, you first need to know what they are exactly. First, they should be similar. In our case, both are laptops. Second, they should pose a question or confusion to answer or solve. Yes, we’re confused and we want answers.

So let’s start with knowing about the two.

What is a Chromebook?

A Chromebook is a simple, stylish, and cheap alternative to a windows laptop. You might have used an Android phone. Consider the Chromebook as an Android device that’s been shaped like a laptop.

Of course, that’s just mere underestimating what it can do.

The OS that it runs on is called Google Chrome OS, which is basically wrapped around your experience of Google Chrome and Android apps from the play store.

Google has managed to give the UI some touches of Windows so that the machine might not feel alien to you at all. But in its entirety, a Chrome OS is very different from that of Windows.

It runs purely on the internet much like you use Chrome on your Windows laptop. All the web-based apps have to be run on this browser optimized for the performance-driven by low-tier Intel chipsets. You can use Google Docs, Sheets, and whatnot all on the web without needing to install any proprietary software.

To be honest, you can’t install any proprietary software that is meant for Windows or Mac for that matter. Thankfully enough, the recent inclusion of support for Google Android apps lets you use the versions run on Android. So, that’s that.

The ports options are just basic like the OS itself. In the low costing Chromebooks, you shouldn’t expect dazzling screens and mechanical keyboards but some models like Google Pixelbook Go and Acer Chromebook Flip come with premium specs, including a screen to drool over.

So, all in all, a Chromebook is shaped like a laptop, there are even convertibles and tablets, but it is different from a Windows laptop by a mile because of its operating system.

A Streambook is a lighter cousin of the Windows PC. How? It runs on Windows and has similar features. The difference is in the construction, design, and specs.

Streambooks were launched as a tough competition to the Chromebook by HP and Windows. You won’t see them being produced by other manufacturers for obvious reasons.

I like the way they are designed. HP touts them as “fan-less”, which means they don’t have fans at all because of the extremely low or negligible heat produced by the low-tier Intel chips like Intel Celeron 4000 series or lower generations of Core i5 and i7.

These laptops have been created to target the same customers Chromebook targets – students, home-based employees, and people who aren’t adept at using high-end machines.

However, unlike Chromebooks, these laptops do not come in a variety of designs and styles. They are quite basic with in-the-face popping colors.

By default, you get optimized Office 365 and OneDrive along with all the online Google apps such as Google Drive, Google Docs, and Chrome.

To sum up, a Streambook is a lightweight Windows laptop meant to do light home office work and study.

Head to Head Comparison of Chromebook and Streambook

As you read, the two differ in OS. Chromebooks run on Google Chrome OS and Streambooks have Windows at their core.

Both are light versions, meant to run online tasks with great accuracy.

However, the major difference between the two is the fact that Google OS cannot run dedicated Windows apps such as Microsoft Word or Office 365. It also does not run a slew of different Adobe applications. You have to rely on the Android versions of these apps that are accessible through Google PlayStore.

At the same time, another difference is the timely updates. On Streambook, you may not get updates as quickly as on the Chromebook. Generally, Google releases updates almost every month. So, you’re always up to date.

Chromebooks are a world of their own. They range from basic plastic models to aluminum and magnesium alloy laptops. For example, the HP Chromebook x360 is all plastic while the Samsung Galaxy Chromebook is all metal.

So, in terms of the material used, you get a lot of options than the usual boring plastic.

The designs also offer a wider range. The Asus Chromebook Flip C436 is a convertible 2-in-1 laptop while the HP Chromebook x360 14 c, a newer model of the x360 is standard Island type. You even get all-in-one desktops like the HP Chromebase 21.5-inch All-in-One Desktop.

On the other hand, Streambooks don’t offer a lot of design and construction options. There are only a few models such as Stream 11 and Stream 14. Both come in plastic that does not feel cheap but is still plastic. They are not convertible.

Honestly, there isn’t much to talk about in terms of that when it comes to the Streambook.

Again, the wide range of displays offered by different manufacturers of the Chromebook takes an edge over the 1366×768 pixels display of Streambooks like the HP Stream 14.

While most of the low-end Chromebooks offer a 720p display, the high-end models like the ASUS Chromebook Flip C436 have an FHD panel and that too, touch-enabled.

That is another difference in terms of display. Streambooks are not touch-enabled.

As you read, Chromebooks come with different CPU configurations or chipsets. For example, the cheaper model Lenovo Chromebook Duet has MediaTek Helio P60T processor with 8 cores and 8 threads. Take a few steps towards the midrange and you find the Acer Chromebook Spin 514 with AMD Ryzen 5 3500C. In contrast to these, the high-end Samsung Galaxy Chromebook has Intel Core i5 10th generation at its core.

So, you see, Chromebooks come with different chipsets, depending on how much you’re willing to pay.

In comparison to this, the HP Stream 14 comes with the Intel Celeron Dual Core. While all of the chipsets mentioned here have their own capacity and they work better in their own regimes, there is still a marked difference in what Intel Celeron could do and what Intel Core i5 10th generation can achieve. Obviously, the latter has more potential than the former.

You’d find the same contrast in RAM and hard drive capacities. In Stream 14, you get 4GB RAM with 32GB HDD while in the models mentioned above, the RAM ranges from 4GB to 8GB and 32GB storage to 256GB. Some of the Chromebooks even come with SSD, which is a new and snappy variant of the previous and age old hard drive.

Bear in mind though that both Chromebook and Streambook come with cloud storage. The Stream 11 is sent with 1TB Microsoft OneDrive Storage for free.

Chromebooks have amazing battery life. The average battery timing is around 10 hours. Some can even surpass that such as Acer Chromebook 514 with 12 hours of battery.

However, the Stream 14 can only last for about 8 hours at most.

The Battle of the Newage Laptops – Who wins Chromebook Vs Streambook?

The results of the batter really boil down to your choices and needs.

While the apparent winner in everything is Chromebook because it offers more variety – courtesy of different manufacturers involved, the Streambook still stands as a better choice in many things.

So, buy Chromebook if:

And that’s it from the Chromebook Vs. Streambook.

Let’s have a look at some of the frequently asked questions by users.

Is an HP stream a Chromebook?

Yes, they are low-powered devices, used for light tasks such as surfing the internet, browsing documents, and other simple things that won’t require much computational power.

Which is better a Chromebook or a laptop?

Chromebook has its own operating system known as ChromeOS, which is designed with low battery consumption in mind and relies heavily on the internet to function. Laptops are much more versatile and can have both Windows and Linux operating systems installed in them.

Can you use Word on a Chromebook?

Chromebooks are designed to accomplish simple tasks that require minimal power, for example, using Microsoft Word in your daily office routine to edit your documents.

What is the difference between an HP Stream Laptop and a Chromebook?

The main difference between the two is that of their operating systems. The Chromebooks run on Google Chrome Operating System. This one is based on the Chrome browser. Mostly you can run online apps on it such as Google Docs, and other web-based apps. You cannot install any app as you do on Windows PC. However, you do have access to the Google PlayStore that has an unlimited number of apps ranging from productivity to games and beyond.

The apps from PlayStore run smoothly because they don’t require a lot of power. So, the Intel Celeron 4000 would also suffice in terms of performance. That’s no biggy.

As compared to this, the HP Stream laptops such as Stream 11 and Stream 14 run on Windows 8 and 10. They are the lightweight versions of Windows PC. They can run a plethora of Windows applications online and offline. For example, you can install Microsoft Office and so on.

So, you don’t have a lot of options there. For heavy work such as editing and working on many tabs at the same time, the Stream laptops might not do well but the Chromebooks would take an edge certainly.

Next is the design and construction. The Chromebook has plastic in its base models while the high-end models are made from metal all the way around. This takes user experience to a new level but at the same time, it also asks for more money.

Ultimately, the difference between an HP Stream Laptop and a Chromebook ranges from the OS to its parts and beyond. Both laptops have different uses and are suited for different people.

For example, if you’re familiar with Windows but you cannot buy an expensive Windows laptop then Stream models will suffice for you. You’d be able to enjoy all the offline apps and more.

However, if you want to keep things really simple and your work mostly revolves around web-based apps, then buying a Chromebook is a good option. For one, it performs better, has a greater battery life, and the updates just keep on coming every month. You stay protected and updated for the times to come.

So, all in all, I’d recommend the HP Stream for those who want to get a laptop that performs but does not ask for a lot of money. Similarly, Chromebook is for those who aren’t tech-savvy but want a better machine.