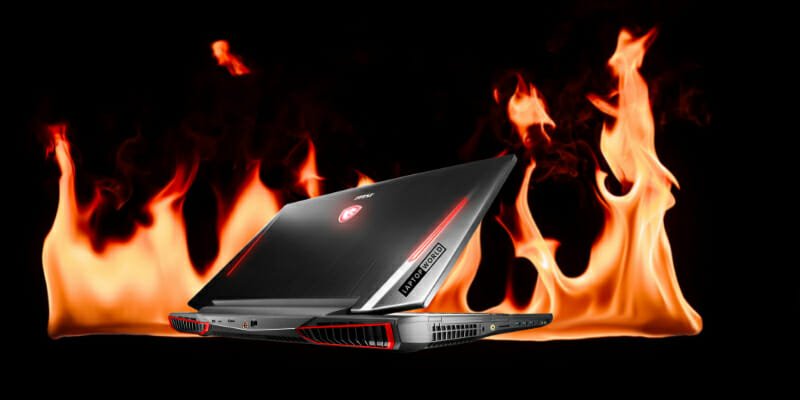 To me, this question is no different than like you are asking, “do gaming laptops play games?”. Literally, yes. Jokes apart, gaming laptops are equally good at getting hot as they are at playing games. In fact, this overheating issue is sort of a never-ending issue with gaming laptops, at least till now.

Table of Content
What Actually Causes Gaming Laptops to Get Hot?
Some Other Factors/Reasons That May Be Causing the Laptop Overheat Issues
Do Gaming Laptops Overheat? – Signs and Warnings That Your Laptop is Starting Roasting
How Hot is Too Hot for A Gaming Laptop – When Should You Seriously Watch Out?

Gaming laptops, without doubt, have just revolutionized the computer and especially the gaming PC industry. Back into the days when gaming used to be confined to those heavy and non-portable desktops or TV-contingent consoles.

And when gaming used to be limited to the home only, these laptops have turned all those things upside down.

But how did laptop(s) manage to do that? Simple, because they got stuffed with some additional powers and vigor. Yes, a lot of extra powers, and that’s why they – the gaming laptops, overheat.

So yea, gaming laptops get hot because they pack some jet-set hardware i.e. some stellar CPUs, enlarged memories and whopping SSDs, etc.

What Actually Causes Gaming Laptops to Get Hot?

Well, these things still don’t account that much for these overheating issues. The actual thing is those dedicated video card(s) – also called graphic processor(s) or GPU that a gaming laptop fits in.

Thus, where on one hand, in a standard non-gaming laptop, it’s only the one thing generating heat i.e. only the CPU, in a gaming laptop there are two i.e. the CPU as well as GPU. So, if the system’s processor is generating some heat, the graphics processor always surpasses it in doing so.

When under some seriously heavy loads i.e. under ruthless gaming or any other demanding multitasking, this duo keeps working its ass off to make up with the demands. This results in generating some crazy heat inside a gaming laptop as compared to a normal laptop. And this is the key reason why do gaming laptops overheat.

That said, compared to a desktop setup, in a gaming laptop, all these things are compressed and integrated into a small casing.

This makes the aeration gets curtailed, the heat’s go-out gets minimized, and that’s the major reason for all the heat build-ups in the gaming laptops.

Besides the things i.e. the laptop’s own/internal things, there could be plenty of other factors, too, causing these overheating issues to happen. Some of such most commonly encountered ones are below.

Do Gaming Laptops Overheat? – Signs and Warnings That Your Laptop is Starting Roasting

The warnings range from some unusual message pop-ups on the screen to some mild performance breaks/glitches and even to processors’ throttles. But, anyway, here’s a list of what likes of things happen when your laptop starts overheating.

These and perhaps lots of others too, you can come across any such situation while your laptop soars up to high temps. So, do stay concerned about all such unusual fall-outs to avoid any serious damage, etc. that might be approaching.

Notwithstanding, it’s a must to consider doing every single thing you can do to optimize the heat management of your laptop. Because caring for only this one thing – keeping your laptop cool/chilling, and doing nothing else, can help make your laptop be your lifelong partner.

If you don’t have any idea how to cool down your laptop while gaming or working, we’ve got a separate article on it with eleventy of cooling approaches discussed in detail.

How Hot is Too Hot for A Gaming Laptop – When Should You Seriously Watch Out?

Well, as mentioned above, it’s always a YES to the question “do gaming laptops overheat?” and heating issues are almost normal with them. But, there do exist some limits for it too.

Yeah, there is no such thing as “a gaming laptop that doesn’t overheat” in the literal sense. But that in no way means you should never keep an eye on these things.

Beyond the highest extreme, this overheating can lead not only to working throttles but to severe performance drops and ultimately to complete hardware damage. It means you should keep a sharp eye out for all that.

Anyways, a rough idea about a laptop, a gaming laptop’s temperature figures is that:

Actually, anything between 70 – 80 (Celsius) is a normal temperature for a gaming laptop when it’s heavily laden. Although, there do exist such gaming laptops in the market where the extreme temperature limit is even 90 – 100-degrees. But, that’s a bit of an uncommon thing.

So, it’s mandatory to keep an eye on these figures on your laptop. Any temperature, at any moment, beyond the highest extreme would lead to some serious damage to your system.

Do gaming laptops get hot?

Laptops that are designed for gaming tend to get overheated over time, especially when performing CPU-intensive tasks because these devices are often equipped with multiple cores processors and massive graphics cards that consume a lot of power.

What happens if a gaming laptop overheats?

In the event of overheating, gaming laptops are designed to push their ventilation fans to their maximum level to flush out hot air and suck up colder air to prevent thermal damage to their hardware. Additionally, gaming laptops throttle down their frequencies to reduce overheating.

How do I stop my gaming laptop from overheating?

Investing in external cooling pads can be a wise decision if your laptop is overheating to unbearable temperatures. Furthermore, using your laptop in an air-conditioned environment negates overheating problems to an incredible degree.

Gaming laptops overheat, and this is one twin thing with these laptops – twin with their top-notch performance.

That’s why when someone asks questions like “do gaming laptops overheat?”, the answer is usually a conk out. A sigh of relent – “Yeah, they do”. The thing is how you manage to make up for that.

And, this is all that I’ve discussed in this article i.e. do gaming laptops get hot? If yes, what are the reasons for it? How can you come to know that?

And, finally, what are those extreme situations where you should watch out and do some serious measures to riposte to the overheating matters.

Scroll up to it if you too have any confusion regarding all this!