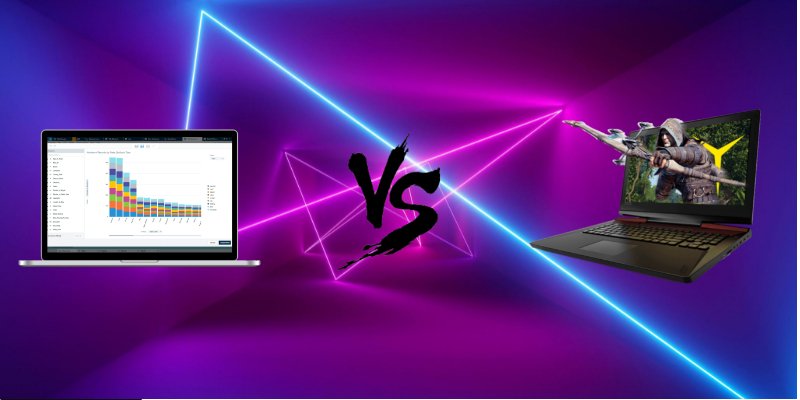 The world is growing at a steady pace and when I say the word growing, I don’t just mean it by population but also by its demands. These demands are met by the industries that work tirelessly to meet the standards and requirements of the general audience.

However, the main credit goes to the people that put all their efforts to come up with ideas and innovations with maximum creativity because not everyone wants the same thing and manufacturers have to make a little difference in their products to satisfy their consumers.

Here the main question lies in gaming laptops vs business laptops and how they are different from each other? Although you would be wondering if they are both laptops they must have the same components right? The simple answer is, NO.

There is a whole host of things that sets one aside from another and that’s not just the price but also its expectations and software.

Gaming Laptop Vs Business Laptop, How Are They Different?

To shed some light on it, I have breakdown the list of things that make them apart, take a gander.

Starting off from the most obvious attribute, a gaming laptop tends to have a better quality build, with a premium finish because it has withstood something much more than a traditional business laptop would on a daily basis, the rage of a gamer and his/ her blows.

A gaming laptop is much tougher so that it can compensate for major shocks and impact with ease such as the Asus TUF Dash which is made from military-grade materials that are made from top-notch materials. These special chassis finishing cost money which increases the total price tag of a laptop.

On the other hand, a business laptop is made from simple plastic or an aluminum body with barely any protection because it is only meant to be carried in a bag and has simple official tasks to be done on it.

It is common knowledge that a business laptop only has hardware specifications that are meant to do office-based tasks such as document surfing, using Ms word, or making emails, which is why they have a mobile efficient processor that not only conserves battery so that you can stay put for longer periods but also generates less heat so that you can work comfortably with ease.

On the other hand, a gaming laptop has to emulate Triple-A games with demanding graphical components. And to remunerate such polygons and HD textures a high-end processor and a dedicated graphics card are needed.

Furthermore, the processor of a gaming laptop has multiple cores to perform multitasking and other CPU-intensive tasks with no hurdles, which a business laptop lacks.

Generally, business laptops only have a smaller sound system that only emulates sound for the purpose of watching youtube videos as well as movies.

However, a gaming laptop specially tuned Sound system by Dolby Atmos that supports either Stereo or 7.1 surround sound capabilities to give you the vibes of realistic gaming without missing a beat.

However, for official use, these specifications aren’t necessary which is why a business laptop doesn’t have any of these features included and the refresh rate is pretty much confined to 60hz.

All these specifications come at a cost of being bulky which increases the weight that drastically impacts the portability of a device.

For business use, a traditional laptop is much more lightweight and slim because it has a mobile processor and components which doesn’t take up space and you can carry it from one place to another without feeling bulky.

Although a gaming laptop can also be moved, it is significantly much more voluminous due to heavy-duty components that add up to its weight making it immensely heavier.

A traditional business laptop only has simple white illumination for the keyboard or no backlighting at all. Moreover, it has a full layout with complete dedicated numeric keys so that you can perform office-based tasks.

In a gaming laptop, the numeric keypad is often missing but you have the liberty to fully customize the keyboard illumination depending on your style and mode with multiple zone colors.

A gaming laptop comes with special software that provides features like temperature and frequency monitoring which can be also tweaked. This software also has plenty of shortcuts like screen recording, streaming, and other nifty tools for a gamer such as MSI Dragon master.

In a business laptop, these tools are often missing because they serve no purpose due to incompatibility and generally have stock windows operating systems with little to no optimization software.

As heavy-duty components put a strain on battery life, a gaming laptop generally has a shorter battery life span with a runtime of only 2-3 hours at maximum. This often requires plenty of tweaking such as underclocking to prolong the battery life.

A business laptop has much more battery-conservative components that don’t eat up all the juice and ensure the laptop stays up for longer periods so you can get better runtimes of about 10 hours.

Can you use a gaming laptop for business?

You can, however, their battery life will not last you all day long and they are pretty bulky so they might weigh you down when you travel.

Is a gaming laptop better than a regular laptop?

Except for the price tag, they are far superior to regular laptops in almost all aspects such as display, hardware specifications, and aesthetics.

What are the disadvantages of gaming laptops?

So these were the general differences between a gaming laptop vs business laptop. They might look identical but have plenty of differences that revolve around the tasks they were manufactured for.

If you were looking to invest in a laptop and didn’t have much knowledge about them, I hope this article has been plenty beneficial for you after reading the article.

Feel free to comment below if you have any queries.