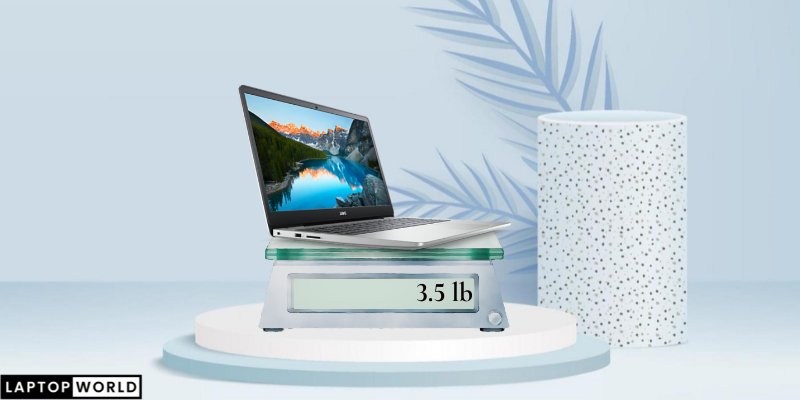 Here’s the quick answer. Specializing in the field of portability, an “ideal laptop” weighs around anywhere from 2-3 pounds. Such laptops are considered ideal due to their functionality, design, and overall price-to-value ratio. Laptops used by students and office workers are roughly expected to weigh around 3-4 pounds while casual laptops expected build weight is roughly around 4-5 pounds. On the other hand, we’ve gaming laptops that weigh somewhere around 5-6 pounds. Thus, the average weight of a laptop is around 3 pounds.

Table of Content
How Much Does a Laptop Weigh? Let’s Divide
For Office Use
For Casual Use
For Hardcore Gaming
Frequently Asked Questions – Laptop Weight

In other words, when investing in a laptop the most important factor to look for is how much does a laptop weigh because you might compensate with other specifications but weight is something that can’t be ignored directly.

Although, it is obvious from the fact that the weight of a laptop is directly proportional to the hardware components that are included by the manufacturer, and the lighter a laptop is, the higher trade-off and corner-cutting you have to do with respect to its internal organs such as hard drive, graphics card, a bigger display or something as simple as additional lithium batteries.

To further shed light on these attributes mentioned above, let’s dive into the categories of laptops and how they differentiate each other.

How Much Does a Laptop Weigh? Let’s Divide

In general, there are three categories of a laptop that sets them apart:

Now let’s discuss them one by one.

Starting off with the topic of “How much does a laptop weigh” we have office laptops at the top.

Well as the name suggests, these are the most rugged and dull designed laptops that have their hardware revolved around official purposes.

They are also called business laptops and usually have higher RAM and hard drive or SSD capacity. They have considerably higher horsepower than a casual use laptop due to a higher core count and do cost a pretty penny.

The use of graphics cards isn’t that necessary for obvious reasons and they might or might not include a dedicated graphics card, to begin with.

They are mostly suitable for tasks such as document work, MS word, MS Office, Rendering, and video editing.

Moreover, they are also considerably lightweight since they are heavy to work on the go and often have decent battery capacity so that they can perform overtime without being shut down and causing a nuisance to the owner.

And also have a standard screen size so you can work on a larger spreadsheet with a complete layout of the keyboard to utilize that numeric keypad according to your needs.

In terms of weight, they are roughly expected to weigh around 3-4 pounds

Laptops that come under the tent of office use are Macbooks or Ultrabooks which are highly optimized hardware specifications with plenty of cores. Some of the examples are,

Suffering from middle child syndrome, casual use laptops are the ones that are much more versatile and often have almost all the attributes but at the same time with plenty of corner-cutting in quality.

They usually have decent hardware specifications that are suitable for everyday use and often tend to have sufficient hard drive capacity to house all your precious data such as your school projects, music, games, photos, and movies.

And in terms of battery capacity, they also perform significantly better but don’t have a bigger screen or fancy refresh rates.  Although their keyboard doesn’t have a full layout, they usually weigh much higher than office-based laptops due to a dedicated graphics card which you wouldn’t see otherwise in an office-based laptop.

Moreover, to dissipate heat, these casual use laptops generally have a standard ventilation system with more than one port to vent out any unnecessary heat that might generate over a longer period of use.

Their chassis are much prettier and often made of aluminum and have higher aesthetic points so that these laptops look trendy.

Their expected build weight is roughly around 4-5 pounds due to all the hardware components mentioned above which makes them a tad bit bulkier, but you wouldn’t find them being a nuisance when traveling around since they have decent ergonomics, design-wise.

Some of the casual use laptop examples are,

I hope you must have a clear idea of how much does a laptop weigh. But wait, we have also the gaming laptops. Let’s dive.

Taking a look at the name tag, you would have gotten a decent idea of what sort of laptop these are, however, if you still want to dig up the details let me fill you in that these are some of the top designed laptops that don’t shy away when it comes to performance.

They are almost complete with full-fledged desktops when it comes to hardware components such as heavy-duty graphics that support all the fancy technologies like the new tracing and DLSS 2.0 or AMD fidelity fx. Being a high-tier laptop also requires a robust amount of heat dissipation like copper ventilation and multiple heat sinks and cooling fans which adds a massive toll on the weight of a laptop.

Additionally, these sorts of laptops also have much higher core counts and even bigger hard drive capacity to store the unusual amount of files such as larger video games and HD render output from video editing software.

However, their battery capacity is generally bleak and performs poorly in contrast to its performance ratio. Which makes them not fit for traveling and renders them almost unportable because of power-hungry components like higher refresh rates and bigger graphics cards and significantly higher CPU cores.

As expected, these sorts of laptops weigh somewhere around 5-6 pounds. Examples of hardcore gaming laptops are:

If you want to know how much does an average laptop weighs, I’ve answered all of the faqs below.

What makes a laptop heavy?

Typical culprits include massive graphics cards and intense cooling systems, as well as heavy screens and a full layout keyboard, which can make a laptop bulky enough to be considered heavy. As well, the external aspect also negates any portability, such as how sturdy the body is and the type of material it is made from, for example, plastic or aluminum.

How do I know the weight of my laptop?

There are two ways: you can check the instruction manual that came with the laptop package or you can search for your laptop model on the internet to find the manufacturer’s website where you can find all the specifications and how much does your laptop weigh in either pounds or kilograms. For a more straightforward answer, you can just weigh your laptop on a scale to check for its weight.

How much does a 15-inch laptop weigh?

In general, 15-inch laptops tend to be light in weight and generally weigh between 1-2 kilograms, depending on the brand. For everyday use, these types of laptops are the sweet spot in terms of weight.

Are 4 lbs heavy for a laptop?

Four pounds of the laptop is far from heavy since it could be easily carried in a bag without weighing you down. Although there are still lighter products available on the market if a 4 lbs laptop doesn’t sound appealing to you.

How much does a Chromebook weigh?

The Chromebook is known for its lightweight, durability, and portability and generally weighs around 1 kilogram, which feels as light as a feather when carried around.

How much does a MacBook weigh?

MacBook Air being marketed as a super lightweight version in the Macbook series weighs only around 2.75 pounds, however, the Pro version of the MacBook does have extra gimmicks in their hardware which makes them a tad bit heavier, ranking at 3.02 pounds.

How much does a 15-inch laptop weigh?

A 15-inch laptop weighs around 6 pounds or 2.72Kilograms, approximately.

How much does a 17-inch laptop weigh?

A 17-inch laptop weighs roughly around 2.5-3kilograms, depending on the material it is made from.

Is 2 kg heavy for a laptop?

In general, 2kg isn’t significantly heavier because almost all notebooks and laptops roughly weigh around 2-2.5Kg.

The market for laptops is cluttered with an ever-increasing supply of laptops that come in different shapes, sizes, and specifications to meet the demand of consumers.

That being said, the examples mentioned above are solely based on today’s standards and may or may not be suitable for the category allotted to them as these mentioned products are merely presented to give you an idea of how much does a laptop weigh.

I hope this article was well worth your time and hope you had a beneficial read.