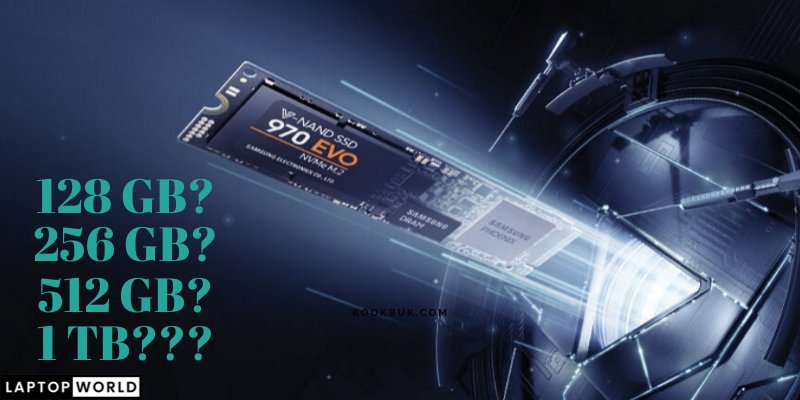 The issue for higher storage capacity is an endless debate and as with the newer releases of video games titles, it has left everyone with their head-scratching wondering how much SSD do I need for gaming?

Nonetheless, the question stays valid because there is no sweet spot when it comes to storage capacity in gaming, and in this case, it is safe to assume the term “more is better” is almost always a favorable strategy to follow.

However, it is easier said than done due to fact that solid-state drives usually come at a hefty price tag, and financially managing your pennies is something you should always think about before committing to an investment.

Is 256GB SSD enough for gaming?

Well, if you are a casual gamer that wants to play games that are story-oriented such as Shadow of Tomb Raider, Far Cry New Dawn, then feel free to invest in a 256GB Solid-state memory that will aid you well in the loading times.

If you are an avid gamer, then I can assume you might own a plethora of games ranging from both RPG and first-person titles such as Crysis Remastered edition, Halo series, or the new installment from Ubisoft game, Far cry 6. If that is the case then take my answer as an affirmative action because you would be needing those extra Storage space to accommodate those extra downloadable content.

In short, storage capacity is all the same whether it’s HDD or SSD, although you might benefit from quicker loading times in SSD, however, games that are compact or are almost half a decade old benefit very little from the speeds provided by the Solid-state capacity, so if you are feeling a little tight on budget, there is no shame in investing in a tiny Solid-state drive. Be assured you will still enjoy your favorite games like Battlefield 3, Call of duty Ghost, and other open-world games like Assassin’s Creed Syndicate without pushing the limit of your headroom with ease.

However, Solid-state drives have 2 sub-categories, each having its own interface.

A SATA SSD Is a type of Solid-state drive that doesn’t have mechanical moving parts like a traditional hard disk, which usually has a disc and a head that reads data from different sectors. But utilizes circuits known as flash memory to store data.

Although they might operate the same as a regular hard drive and have the same SATA interface, they tend to be quite faster when it comes to transferring rates which range from 500-600Mbps.

They are considerably cheaper than an NVME form factor SSD and have higher speeds than HDD. making them a  budget option for anyone looking to get their hands on a cheap memory storage solution without breaking the bank.

These are the fastest and latest form of Solid-state drive and have blazing-fast transfer rates that range from 1500Mb-2000MB. The reason behind the high speeds is the PCI-E interface which cuts down the travel time of data being carried from the flash memory to the processor.

They are immensely fast and store temporary data in their DRAM cache which cuts downloading times of video games in mere seconds. However, they also are super expensive the former memory mentioned above.

How Much SSD Do I Need For Gaming?

Now that you are well aware of the types of Solid-state drives and their transfer rates, let dissect how much storage capacity you would require depending on the style of your gaming.

I’ve divided the gamers into 3 types based on their gaming style and preferences.

A casual gamer is someone that likes to play indie games and role-play strategy games which doesn’t require much storage capacities such as the world of warcraft, age of empires, civilization franchise, and many others. If your playstyle revolves around these games, then I would advise you to get an SSD ranging from 128GB to 256GB which is more than enough to house your operating system as well as your games.

Mid Tier gamers are generally those that want to enjoy offline games which are much more story-oriented and don’t require an online internet connection such as Witcher 3, Resident evil village, and Assassins creed Valhalla.

For such games, and NVME SSD has highly suggested which ranges from 256GB to 500GB because usually open-world games tend to require large space due to plenty of polygons and high definition textures. Moreover, they also have plenty of loading screens which are drastically reduced by NVME SSD.

These are the most committed type of gamers that likes to play all sort of video games that ranges from online competitive multiplayer games to high-end graphics demanding story-based games such as Call of duty Cold war and Tom Clancy’s The Division 2.

Because these games have the file size ranging from 150GB to 200GB which is beyond standard storage expectations from a video game, so be assured you will be needing an NVME SSD that has the storage capacity of 500GB to 1TB to store all your operating system files as well as your high-end games.

Things To Consider Before Choosing the SSD for Your Computer

Make sure you have a solid processor with plenty of cores and RAM capacity to process high-speed transfer rates from your SSD, otherwise, you would end bottlenecking your system which might prevent you from taking advantage of a Solid-state drive blazing read and write rates.

Furthermore, you should also keep in mind that Solid-state drives only gives you the benefit of lesser loading times and faster operating system bootup, and other than that there is little to no difference in a traditional hard disk and solid-state drive and if you are on a budget you can safely invest into a mechanical hard drive which has the much higher capacity with the same price tags as an SSD which has lower storage space.

On the other hand, you should also note that not every NVME SSD has a DRAM cache present, please check the manual of your NVME SSD before purchasing it.

So that’s all you need to know about Gaming and storage solutions, and I hope you still aren’t pondering on how much SSD do I need for gaming because I made sure to briefly explain as much as possible in this article.

Feel free to let me know if you have something in your mind in the comments section below.