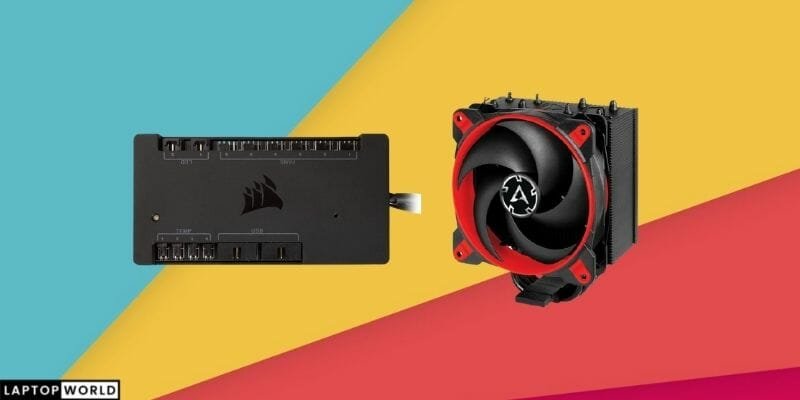 Ten to one, BIOS is the only ideal approach to make any user-defined system adjustments. Be it the fan (speed) controls or whatsoever else.

But, for whatever reason, say, you aren’t, or you can’t make the changes there. And, you are puzzled thinking “how to change CPU fan speed without BIOS?”. Then what?

Then, there is no way out except for going for some third-party assistance. It can be opting for a fan control software or an external fan controller, etc.

Well, having a sharp eye out on the processors’ fans is emphatically crucial for your system’s overall health. Having the CPU fan(s) working properly – at par with your work demands is as important as is the CPU’s working itself.

Because the CPU is, no doubt, doing the jobs, but it’s the fan(s) that is actually handling things smooth by keeping the processor cool and chilling.

Contents show
Making Changes from BIOS is Always the Safest Way – But
How to Change CPU Fan Speed Without BIOS?
Using Control Panel to Control CPU Fan Speed On Windows 10
#1. Use Some Fan Control Software
Some Widely Known Fan Control Software – Both for Windows and Mac
How These Software Work?
SpeedFan
#1. Download/Install and Preliminary Set Up
#2. Tinker with Some (Fan, etc.) Controls
#3. Go for Automatic Fan Control Setup
#2. Try an External Fan Controller
Conclusion

Making Changes from BIOS is Always the Safest Way – But

Again, it’s the BIOS from where you can make all these non-default settings i.e. CPU fan (speed) adjustment and lots of other changes.

But, at times, BIOS doesn’t work appositely as intended. This could be due to two reasons i.e.

Now, that’s when you’d need to go for the alt ways. What? How? Here’s everything in detail.

How to Change CPU Fan Speed Without BIOS?

There are only two way-outs when such is the matter with you. Yes, here’s what you can do to control your CPU fan speed when you want to go for a secondary approach.

Before going to discuss these two methods, here’s one spare tip for Windows 10 users.

If you are a Windows 10 user, you’ve got an added utility to optimize your fan(s) performance besides these two above-named methods.

Windows 10 comes with an in-built fan control feature which you can access via the control panel. Here’s how it works.

Click “Apply” and then “Ok”. This will result in an increased fan speed in both the two conditions and, resultantly, a lesser heat buildup – ergo.

#1. Use Some Fan Control Software

Using a fan control software for CPU, GPU fan (working) optimization has always been the most recommended way out. Nevertheless, the manual (from BIOS) setting is safer, but that’s not as convenient and accurate as is using this automatic method.

Where reaching out to BIOS and making the setting is a lengthy and inconvenient process, these software are one-touch go-to methods.

They keep an eye on the processors’ working and their temperatures, etc., and instinctively take the necessary measures when required. If the processor(s)’s getting hot, the software will automatically increase the fan(s) speed until things get back to normal. And vice versa for the other case.

Some Widely Known Fan Control Software – Both for Windows and Mac

There are loads of such software available. Some of the most widely known ones include “SpeedFan“, “Real Temp”, “HW Monitor“, “HWiNFO“, “NoteBook FanControl”, etc. for Windows OS.

Whereas, for Mac OS, “iSTAT Menus” and “smcFanControl”, etc. are the most widely used/recommended fan performance optimization software.

How These Software Work?

Although that depends, and different software have different usage parlance, etc. Still, let me discuss one of the most extensively used and, sort of, a pioneer fan/heat optimization software i.e. SpeedFan.

As mentioned above, SpeedFan is one of the industry-standard fan control software. Unlike any other such program, here you get some extra perks and features.

It can be a bit taxing for a beginner or kind of naïve person to set it up. Therefore, here is a step-by-step guide on how to have the application up and working.

And, yeah, before going down into the crux, here’s a bonus suggestion for you. This software is not compatible with every system, therefore, do check out its compatibility with your system and chipset.

Well, let’s get down to how to change CPU fan speed without BIOS – with SpeedFan.

#1. Download/Install and Preliminary Set Up

The first step is, of course, looking for and downloading the genuine software from SpeedFan’s official website. So, give it a download from the official website > Install it > And let it do a consummate scan of your computer/laptop.

Once all the buses are scanned and rippled, you’ll see the application’s main menu showing up all your system information. There’ll be everything i.e. RPM of processors’ fans, temperatures, CPU/GPU/Chipset details, SSD/HDD details, etc.

Check out each of the terms, each label thither, and comprehend them. Make sure you know what each term stands for.

Done with all the prefatory setups? Now, let’s start playing with things.

Well, although there is an unchecked “Automatic Fan Speed” button which you can get checked to let the software manage and control things automatically on its own.

But, know that this auto-setup oftentimes doesn’t produce satisfactory results. That’s why you’d anyway need to go for some manual configurations. This doesn’t mean that you should just increase/decrease those PWM nubs and it’d done.

Here’s how it goes:

“Manual” will let “you” set the working benchmarks. “Smart guardian” or “Software-controlled” means the automatic controls by the application itself.

The previous heading was about how to manually tinker with and control your fan(s)’ speeds. This time, it’s about setting up an automatic control setup. So, here’s, bit by bit, how it’s done.

When you have set your ideal temperature limit, go for checking its effects (maybe positive, maybe negative) on your system. Try loading up the system with some heavy apps i.e. harsh use, to check whether the changes are favorable (and working well) or not.

Do save all the settings (changes) when you make them lest, you’ll have to redo everything from the start.

Then, just “Apply” and “Ok”. Now, immediately when your CPU/GPU will start soaring up to that temperature level (that you’ve already defined), the fan(s) speed will automatically increase or decrease accordingly.

And, this was all about how to use the one, most widely used, fan control software – SpeedFan.

Rest, there’re plenty of other applications too, all being named above. Each one has a different interface, features varying features, and works differently. So, if SpeedFan is not compatible with your computer, go for any of the other applications.

Don’t worry if the first method failed and, for any reason it may be, none of the software worked for you. Opting for an external fan controller is the second possible way out if in case you are addled regarding how to change CPU fan speed without BIOS. With these controllers, you can go for fan controls, etc. outside of BIOS and they pretty well do the job as well.

An external controller is also, sort of, manual fan(s) control method. It enables you to keep an eye on your computer’s temperature, etc., and manually start/stop or increase/decrease the fan(s) working/speed accordingly.

While going for an external controller, keep in mind a few things i.e. its pin socket flexibility, how much fans can be monitored at once, its channels, and controls.

While there are loads of them available in the market, I’d suggest you check out the Corsair’s Commander Pro or Thermaltake Commander F6. They feature some pretty innovative specs like an RGB LCD screen to monitor the temperature and other figures, smart sensors, multiple control knobs, and warning alarms, etc., etc.

In short, with the likes of these controllers on hand, you get a complete, go-to manual fan and heat optimization mechanism at your disposal. And, this is, in fact, one best answer to “how to change CPU/GPU fan(s) without BIOS?”.

Properly checking out and adjusting your processors’ fan(s) is quite important to your system’s overall health. This whole setup (fan(s) getting off when the system is under low loads whereas fan(s) roaring up when the computer is overladen) needs to be very well articulated.

You can easily define all these settings by yourself too. And for all such settings, it’s the BIOS one usually consults to. But, what if, at times, BIOS doesn’t allow you to do likes of these settings/changes?

How would you change/adjust the CPU fan speed, etc. without BIOS?