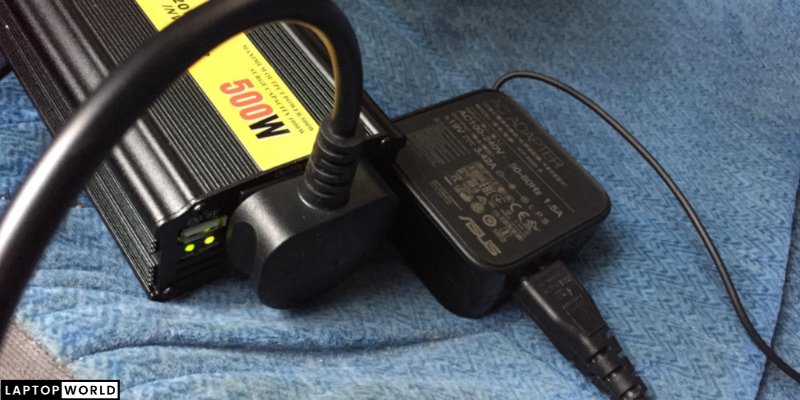 So you’re working on the go and your laptop needs battery juice. Worry not, it’s quite easy to charge the battery right in your car. Here’s how to charge a laptop in a car:

Table of Content
5 Ways to Charge a Laptop in a Car
1. Use Power Inverters
2. Buy Laptop Car Chargers
3. Use Power Banks for USB-C
4. Try a Universal Charger
5. Charge The Battery Itself
Which Method Do I Recommend?

5 Ways to Charge a Laptop in a Car

Your car is run by gas but all the electrical shenanigans have to be taken care of by the battery. Open the hood and you’ll see it peeking right at you. It’s kind of a ubiquitous necessity for every car there is on this planet. In fact, many are transitioning from traditional fuel methods to batteries.

Before I go on to talk about it further uselessly, let’s teach you how you could charge your laptop battery from the comfort of your driving seat.

As the name suggests, power inverters convert DC to AC. Your laptop is charged by AC, so you can’t connect to the car battery directly, which is DC. Besides, you also need definite amperes and volts. This equipment controls that efficiently.

However, know that you may have to connect the power inverter directly to your car battery.

It comes with two battery connectors or clutches, call them whatever, that you have to attach to the positive and negative of your car battery. Once you do that, the rest is easy. There are many USB outlets to use, along with other outlets such as three-prong plugs.

Some models do not require direct battery connections. I recommend you buy them because who has the time to stop the car and then charge the laptop in the middle of nowhere.

Both ways, you can connect your laptop charger directly to the three or two-prong outlet and charge the battery as you’d normally do.

These are separate chargers found online. Instead of having pronged cords, they have inlets made for the cigarette outlet of the car. So, using them is all the while easier. Plus, they are smaller in size as compared to a power inverter. Yes, they may be a little expensive, but considering all of their benefits, why not buy it?

You do have to understand that you won’t be able to charge anything else, though. That is only reserved for the power inverter with its many outlets.

3. Use Power Banks for USB-C

These days, the USB-C charging ports have done great in reducing the inconvenience of carrying huge chargers. So, if your laptop supports it, your wits are in good hands.

Buy a power bank that’s made for charging high-intensity electric devices such as your laptop. They are called Power Delivery or PD power banks. Their outlet matches a laptop’s needs. But do know that the charging rate won’t be satisfactory. You may have to wait for a long time to get a complete charge or you may have to keep the two devices connected until you’re done.

In turn, you can charge your powerbank with method 1.

A universal charger is a laptop charger with more than one pin. It is bulky for one, but convenient for more than one laptop. So, if you’re moving around with your buddies, the best thing is to buy this charger.

Don’t worry whether the output or input will be compatible because normally they are. The charger is universal for a reason, you see.

Many of these chargers come with decent 100+ watts, so you should expect faster charging, or at least more than what you get with the car laptop charger.

However, despite all its universal nature, I prefer you don’t overcharge the laptop with it. I use it for emergency usage to charge my machine just about 30 to 50 percent – enough for a good run.

5. Charge The Battery Itself

Batteries have their dedicated charges available online and offline. These are particularly handy when you’ve either lost your original charger or it has died along the way.

There’s a small inconvenience in using these, by the way. You’d have to remove the laptop battery each time you want to charge it on the go. Although there are indications on the charger that tells you how much it has charged the battery, sometimes that’s not enough. You tend to overcharge the poor thing to its own disadvantage.

I recommend battery chargers only when there’s some problem with the charger, as I said, or the charging pin or port of your laptop has been broken.

Otherwise, why go all that extra mile just to charge your laptop. The other methods are far better than this one.

Which Method Do I Recommend?

Well, to each his own. I mean you have your own requirements, but instead of dictating what you should do, I’d tell you what I do most of the time on the highway.

Does Charging Laptop in Your Car Drain the Car Battery?

Yes, obviously it does. You’re using the power of the battery to charge other batteries, so ultimately it will power down. That’s why I recommend not to charge too much from your car for the sake of the car battery. You wouldn’t want to put too much strain on it, especially when you’re on the road. That’s because it already powers the electric components of your car, including the starting plug.

Is it possible to Charge a Laptop in a Car?

If you are rocking a newer model vehicle, plugging your laptop charger can be as easy as simply plugging it into an electrical outlet because nowadays Car manufacturers are smart enough to include USB interfaces in their Vehicles, however, if that isn’t the case, investing in a power inverter might do the trick!

How to charge a laptop in a car without an inverter?

Although considerably slower and inefficient, you can use a 12Volt Laptop adapter as a substitute for an inverter. You can then hotwire the connection directly to your vehicle batteries in order to power your laptop.

How to Charge a Laptop in a Car – Conclusion

Charging your laptop in a car is easy but you have to buy certain things. A power inverter to act as a power outlet source for your devices is a must, but buying a car laptop charger, a power bank, a universal charger, or battery chargers depends on the level of convenience you want.