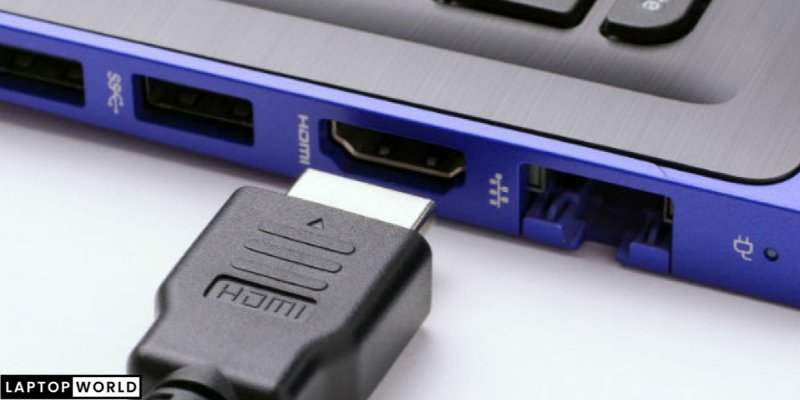 A high definition multimedia interface is a uniquely designed port that is present on almost any laptop that serves its purpose by transferring completely uncompressed audio and video packets that are often large in size to project media files such as video or an image from one multimedia appliance such as your laptop and onto a completely different screen.

To break it down a little bit for your understanding, it basically links your laptop to a projector or television so that you can send your data and enjoy it on different resolutions other than your own.

As per my assumption, you must be here because you either bought a new laptop and have no idea about its ports or want to carry out a presentation but have no idea how to check HDMI version of laptop that you own.

But don’t panic or hesitate, as there is nothing to worry about because today you are in luck by landing over this reservoir of knowledge of a website that will bless you by answering all the queries that you might have.

Speaking of knowledge, let me fill you in on the types of HDMI ports that are universally used and what their purposes are.

There are basically three forms of High definition multimedia interfaces (HDMI) such as :

You might have gotten a clue that the number iterates the type of technology and how new the type of port is, so let’s take a look at the oldest form of HDMI port known as HDMI 1.4,

It has maximum support for resolution up to 2560×1600 and can deliver frame rates up to 75hertz, however, if you tone down the resolution to 1080p then it can even frame rate capabilities up to 144hz which is a prime spot for gamers that want to play high action-paced competitive games.

However, the only flaw in HDMI 1.4 is the lack of 60hz  support in 4k resolutions, so don’t expect to stretch over the higher resolution with a buttery smooth frame rate if your laptop is older and doesn’t have any support for it because you would be only limited to a mere 30hz which is only fit for watching videos or still images.

Moreover, the lack of 21:9 ultra-wide video and 3D stereoscopic format is frowned upon when it comes to HDMI 1.4 making it almost obsolete in terms of projector use.

Although being considered the middle child in the HDMI versions, it still has plenty of aces up its sleeve making it a sweet spot for multimedia connection. The HDMI 2.0 not only has 4k resolution capabilities with frame rates up to 60K but can also stretch its way with frame rates in terms of 1080p up to 240hz which is a massive upgrade as compared to its predecessor.

Moreover, if you can settle for 144hz on 1440p resolution so you can enjoy buttery-smooth gameplay with super crisp details as HDMI 2.0 has an expanded array of colors when compared to HDMI 1.4.

Moreover, it can easily support technologies like the 21:9 aspect ratio and 3D stereoscopic format with little to no problem at all.

The category of HDMI 2.0 is subdivided into two parts

An HDMI 2.0a is the first subcategory of HDMI 2.0 which has added support of HDR (High Dynamic Range).

This is the second sub-category of HDMI 2.0 that goes a little over HDMI 2.0a by also supporting technology like HDR10 format and HLG( Hybrid Log-Gamma format in preparation)  standard support.

Being the most latest form of HDMI version, this has support for all the technologies mentioned above such as HDR10 and HLG but the only upper hand it has is the support for higher resolutions like 4k and 8k with frame rates maxing out at 120hz which is marvelous, but for 8k you need specialized 48G HDMI cables in order to utilize the 120hz.

Moreover, it also has free sync 2 support which is a technology that prevents screen tearing while playing games at higher refresh rates.

How To Check HDMI Version of Laptop

Now the question is how do I know which version of the HDMI port I have on my laptop? Let’s find out.

Now you would be pondering over all these versions of multimedia interfaces and wondering which one your laptop has, but worry not we also have the solution for that which is much more simple than you can expect and all you have to do is simply check the user manual of your laptop and goto connectivity section which will have labeled all the ports available on your laptop model.

This one is a little tricker, however, follow the steps and you won’t have a problem,

How do I know what HDMI version My laptop has?

Your laptop’s HDMI version can be found in two ways: the first is by consulting the manual that came with the laptop, and the second is by checking the manufacturer’s website.

Data transfer speed and bandwidth are the biggest differences between these two types of devices. HDMI 2.0 is capable of transferring 18GBps of data while HDMI 1.4 is only capable of 10GBps.

So that’s about it guys, that’s all the information you would be needing on how to check HDMI version of a laptop you currently own or want to invest in. I know this is esoteric information which is why I have briefly broken down each and every aspect so that you don’t have a hard time understanding the differences in each version.

And I hope it was worth the read and you have benefited plenty from this article, feel free to let me know if you have any queries.