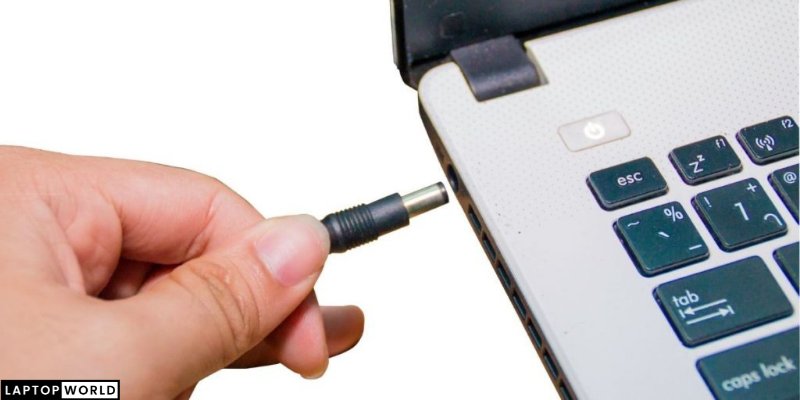 Not necessarily the charging port each time has one certain type of damage only. There can be multiple issues with a laptop’s charging port including a visible injury to the jack’s envelope, damage to the connector tip, a displaced/wobbling connector tip/base, and even a completely out of repair jack.

So to be honest, there isn’t one clear-cut answer to the question, how to fix laptop charger port as every different problem has a distinct fix. Like if there is some sort of physical damage i.e. damage to the laptop’s body surrounding the power port or a cracked (power jack’s) jacket, etc., you can pretty much fix such cases with a glue/adhesive.

Otherwise, there isn’t any other way but to completely disassemble your laptop to discern and fix all other charging port issues. But wait, that’s not a big worry too as I’ve got you covered on how to masterly do that.

So come and read along.

As just stated above, there can be multiple (internal) defects and disrepairs in your laptop’s charging port region. You might at times feel like your laptop is detecting the amps only when it’s placed at a certain angle or like it’s accepting the adapter (pin) only after so many swirls and twirls.

This doesn’t mean that the problem is only with the charging port. Yea, in your case, the issue might be with your laptop’s charger, for example, a defective barrel plug, broken cable (or injured internal wires), or perhaps some sort of circuit defect. So your firstmost task is to identify the origin of the trouble.

Doing so becomes even more mandatory when there is no visible physical damage to the power port (also to the laptop body circling it). Because how come we know it’s only the jack that’s creating the issues?

So, First Identify Where the Issue is Stemming from

Yeah, as obvious as anything, the first thing is to diagnose and troubleshoot where the problem actually rests. And as mentioned above, the problem can be a defective charger and, at times, a faulty battery as well.

Troubleshooting and Fixing the Adapter Issues

The most casual and easiest method (to troubleshoot if or not there is an issue with your power adapter) is to check its output voltage first. You can do this by simply connecting the adapter to Main Line and testing the cord’s end using a multimeter.

If you are getting the exact voltage as is stated on the charger, done – there are no issues with it. Still, before right away going for charging port repair, you can also try putting Out-then-in or even replacing the battery as it might be a faulty battery causing the issues.

Anyways, in case there is improper voltage or utterly no result coming out, you need to delve in and fix your power adapter.

So first of all check the continuity of the AC wires using a digital multimeter or voltmeter to determine any (possible) wire breakage. In the case of disturbed continuity, you’d most of the time need to completely replace the AC cord.

But if the amp-flow is perfectly normal, you must disjoin the DC adapter (by running a knife or any sharp-edged tool between its join) and seek for issues internally. The problem might be a damaged/swollen capacitor, a problematic transistor, or a corrupt diode, etc.

So if you have all the miniature tools and gadgets and you know how to pull the job off, you definitely fix the issue yourself. Otherwise, reach out to a professional repairman.

In case of no issue in the DC adapter either, it may be the DC cable that’s broken and thus causing troubles i.e. charging the laptop at a certain angle and not the way it should – normally. So you may then need to completely replace this DC cord as well.

How to Identify and Fix Multiple Laptop Charger Port Issues?

Well, say you are done with examining each of the portions of your power adapter and you deem like everything is fine there. Moreover, the battery is healthy as well. The charging issues then are undoubtedly stemming from the power jack on your laptop.

But as we know that there can be multiple issues with a power port and not just one specific type of damage, you always need to first identify the exact issue and then go for the solutions.

Few of the most encountered problems with laptop charging ports, as already named, include physical damage to the jack, damaged or misplaced connector tip/pin, wobbling jack/pin, etc.

How to Deal with Physical Damages to the Power Jack?

Although I feel a bit uncertain saying this, I still think like some of the charging port’s minor physical damages are pretty fixable.

For example, if there are one or two minor cracks in the laptop body around the power jack causing it to wobble during connection. Or if you (upon disassembling the laptop) find the cover/jacket of the jack cracked or a bit broken, you can almost fix such issues with just glue most of the time.

All you need is to practice super-extra care while doing so as just a single misplaced drop of adhesive can create even big issues internally.

So that’s the major reason why I feel uncertain that this fix would always and 100% work for you. The second reason why a complete replacement is better than fixing a broken jack is that a repaired jack is still repaired and not new. It might break again soon or get loose in no time resulting in an inconstant current flow, high heat build-up, and ultimately creating other severe internal havocs.

So the best idea is to completely replace the power jack once it shows some issues. You can easily find a new power port/jack for your laptop in the market as well as online by searching “DC/Power jack for (your laptop manufacturer and model)”.

How to Fix a Displaced Connector Tip/Pin?

If there is no such physical damage and the jack is not wobbling either but you still feel it difficult to plug in and out the charger, the problem may very well be a displaced connector pin. And you can pretty much easily see the connector point for whether or not it’s at the exact center.

If that pin is misplaced, you can easily bring it to the appropriate place/position using a needle, a tweezer, or a mini straight-head screwdriver. To do this, you just need to slightly lift the pin-up or down to bring it to the center place. Plug the charger in and out now and you’ll find this fix very well doing the job for you.

How to Completely Replace a Damaged Laptop Charging Port?

Well, opening the back cover and completely disassembling the laptop is obviously the first step while fixing the charging jack. So yea, undo all the bottom case screws and remove the battery, hard drive (if any), memory chips, and all the other (removable) things first.

Unscrew all the other screws and completely detach the whole bottom cover of your machine. So you are now finally seeing the motherboard with eleventy of screws, solders, cables, and connections going through it.

Well, open up further screws therein and take out the whole motherboard so that you can unsolder the damaged piece and replace it with a new one.

Although this thing varies from manufacturer/model to manufacturer/model, most modern laptops today usually come with a distinct circuit for the power jack. Because a charging port soldered directly on the motherboard is quite tricky to deal with in case of any disrepair. Anyways, here is how to fix laptop charger port in both of these two scenarios.

#1. If Charging Jack has a Distinct Circuit/Connector

If your laptop comes with a separate connector for the charging port; the jack is not directly soldered on the motherboard, you can clean, fix, and even replace it in almost no time.

All you need to do is to bring out the connector from the motherboard and look if there is any physical damage on the jack. If yes, I’d recommend replacing the power jack. But if there is no such damage, check if all the wires are coming and properly connected. In case of any missing connection, locate the wire and carefully solder it back to its exact location.

Connect the jack to the power adapter, and check out if the proper voltage is now being received on the connector’s end. If yes, put the connector back on the motherboard, assemble things up, and you are done.

#2. If Charging Jack is Directly Soldered on Laptop

Although it’s a perfectly worst-case scenario to happen with new laptops, you still need to know what to do in such a case.

Well, if there is no other issue with your charger port but just unwanted wobbling, you can easily fix it by refreshing the overall soldering of the power jack on the motherboard. Simply applying the weld-flux on all the tips of the jack would do the trick.

But in case if the power jack is not working at all due to any reason like burning of motherboard’s track (to the jack), damaged pins, or anything else, you’d most of the time need to reach out to a professional to get the ultimate fix.

Or if you think you have all the tools and skills, simply unsolder the jack from the motherboard and solder a new one back on it.

Whereas, in case of burned tracks on the motherboard in the charging jack region, identify the burned track (is it Positive or Ground), and solder a new wire on the other end or empty midway of that track from the power jack.

How Much Does It Cost to Fix Laptop Charger Port?

No doubt you can fix a damaged charger port easily by yourself if you have those miniature components, a soldering iron, and a bit of knowledge/skills in electronics. If not, you can also easily learn how to do it from multiple online/offline sources.

But if you still want a technician to do it for you, the laptop charger port repair cost can be anywhere between $50 and $150. Although the parts are cheap, and a new jack could only cost you around $20 or so (depending on your laptop manufacturer/model), the labor cost varies from city to city.

That’s why a complete laptop charger repair cost, on average, is always somewhere between the above-mentioned two ends (or slightly high in some rare cases).

How much does it cost to fix a charging port on a laptop?

Depending upon the brand you own, charging ports will cost you anywhere around 50-100 dollars if you are lucky enough. If by any chance your laptop isn’t void of warranty, you can literally fix it for free, however, that might be only in best case scenario.

How do I know if my laptop charger port is broken?

For starters, your laptop might not be getting ideal electrical power to replenish its battery cells, moreover, it might also overheat or even cause its charger base to produce an electrical spark, depending on the severity of the damage.

Why is my laptop plugged in but not charging?

It’s either your battery has malfunctioned or your charging adapter is not in its optimal state. If you are using a third-party charger or even a universal one, try opting out for the proprietary charger, which may solve the issue.

In a nutshell, fixing the laptop charger port is although not that difficult, it’s not that easy either. If there isn’t any visible physical damage to the jack or the connector tip but you are still feeling issues and can’t figure out how to fix laptop charger port, you’d most of the time need to completely disassemble your laptop to probe and mend the defect.