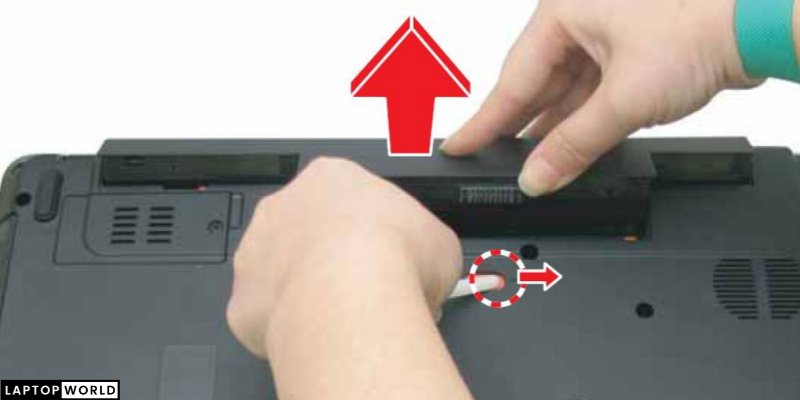 There are two types of batteries in a laptop. The CMOS battery powers the motherboard and BIOS when your laptop isn’t running and the larger one mounted at the back of a laptop powers your whole laptop. Removing both batteries is easy. However, you have to make sure that you do it carefully for the sake of not destroying any sophisticated equipment. So, here’s how to remove the battery from Acer’s laptop.

Replacing an empty CMOS battery is important because it fires up the BIOS in the absence of any external power. If it has run out and you don’t replace it, your BIOS will degrade. The time and date will also not update. All of this causes problems for your laptop. Therefore, keep an eye on the battery level.

How to know if the CMOS battery runs out?

Acer laptops come with two types of batteries. One is a removable battery mounted at the edge of the chassis just below the screen. The other one is present beneath the cover. Both are removed in different ways.

To install a new battery or this one again, reverse the same steps. However, you don’t have to hold the switch to place another battery. Just gently push another one to get it done.

Some Acer laptops such as the Acer Aspire 3 A315-21092FX have their batteries beneath the chassis cover. To remove that kind of battery, follow the steps mentioned below.

Shut down your laptop. Make sure that all the devices are removed and the machine is unplugged.

To the right, find the RAM compartment. Unscrew the single screw present with the help of a Phillips screwdriver. Then, using a prying screw, pry open the compartment.

Press each side of the RAM to recover it from the tethers or clips. Then, hold it between your thumb and index fingers and gently remove it from its place. Don’t force it out. Be very careful.

Now, to remove the hard drive, unscrew the single screw at the top side to get the flap out of your way. With the same prying tool, remove the cover, undo the connection of the hard drive and pull it out gently.

After removing the hard drive, use the same Phillips screwdriver and do away with all the 14 screws on the back of the laptop. This will help you remove the cover beneath to reveal the internal contents.

With the prying tool or your fingernail, start opening the cover first from above and then work your way around.

As you remove the cover, you’d see different parts of your laptop, including the battery. Just above it, you’ll see its connection. It’s a small clip attached to the motherboard. Hold it and gently pull it towards you. Do not force it as you may break the tiny wires connecting it to the battery.

After undoing the clip, pull out the battery gently.

Reverse these steps if you want to put in another battery.

Does the Acer Aspire have a removable battery?

It is generally more difficult to remove the batteries from Acer Aspire laptops compared to other brands, however, it is not impossible. Turn off your laptop, flip it over, then find the special screws for removing the back panel, which will reveal the lithium-ion batteries, which can then be removed from your Acer Aspire laptop.

Where is the battery reset button on an Acer laptop?

A small, minute pinhole is located at the back panel of an Acer laptop which acts as a reset button for your Acer laptop. Just use a needle or hairpin and push it for a couple of seconds to reset it.

How do you force a laptop battery to charge?

Removing the Lithium-Ion batteries from the back panel and pressing the Power button for at least 5 seconds will simply do the trick and enable you to force charge your batteries without any sort of hindrance.

How To Remove Battery From Acer Laptop – Conclusion

Removing batteries from Acer is quite easy. But before that, you’d have to understand that there are two types of batteries: An internal one called CMOS battery that powers the BIOS in the absence of power, and the other one is the regular laptop powering the battery. This one is mounted just below the screen. Follow the instructions mentioned above to remove them so that you don’t hurt any other part of your laptop.