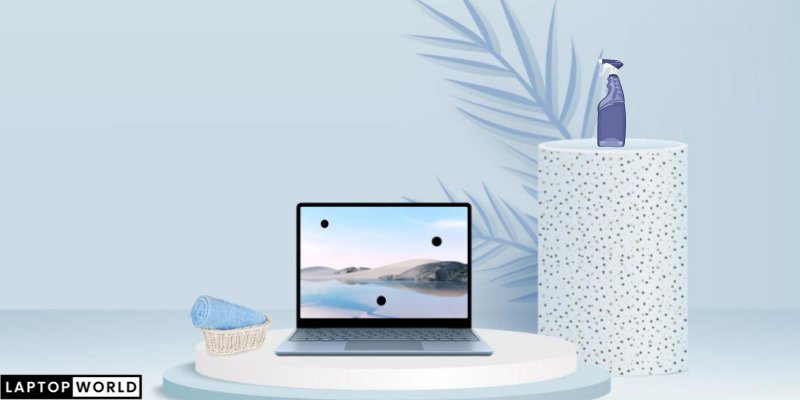 A display or screen is the main component of a laptop that outputs any information that you are currently working on such as a document, video, or any program. Generally, tiny circuits and diodes form together to illuminate light rays to make an image which is known as the screen.

Table of Content
Types of Laptop Screens
What Causes Black Spots?
Dead Pixel:
How to Remove Black Spots on Laptop Screen? Proven Ways
For Dirt and Debris:
For Pixel Being Stuck:
For Dead Pixels:

But sometimes these diodes tend to malfunction due to various reasons turning into a blemish onto the screen known as black spots which can be annoying as they tend to block the view of your screen.

If you are experiencing this problem and are searching for a solution on how to remove black spots on a laptop screen, then let me tell you that you have found a place that is a one-stop solution for everything you need.

Before we dissect the problem, we need to understand the technology behind a laptop screen. Generally, there are two types of screen technology that are often used in the market for laptops.

These are the newest form of screen technology, an LED or light-emitting diode is a semiconductor that illuminates when it is powered, it has a bandgap that determines the colors of a semiconductor diode. In LEDs, each diode works independently in correspondence to other diodes.

This is an older form of technology used in the laptop screen, they have a sheet of liquid crystal that modulates light through a polarizer which is then projected onto a screen. They don’t have the capability to produce light by themselves and often require a light source and act as a modulator.

Depending on the type of screen you are working on, the problem arises due to numerous reasons which are given below.

As mentioned above, a laptop screen usually has sensitive circuits which can be easily damaged if not handled properly, black spots occur due to damage caused directly to the semiconductor diodes which turn into black spots and stop projecting an image.

Sometimes, dirt or other sticky particles tend to sit on your screen which forms together and clogs the view which looks like a black spot.

One of the main issues in light-emitting diode technology (LED) is that oftentimes you would find a dead pixel, which is due to a voltage not being passed through the wires of the circuits that are connected to the diode, hence resulting in a black spot.

Not as annoying as a dead pixel, but a nuisance nonetheless, they look different in color as compared to the dead pixel which often looks like the image is burned black. A stuck pixel projects abnormal colors due to poor tuning of wavelength in the bandgap of LEDs.

How to Remove Black Spots on Laptop Screen? Proven Ways

Black spot on the laptop/computer screen? Well, worry not. Following are the top 3 ways to get rid of it.

For Dirt and Debris:

The first thing you need to do is clean your screen as most of the time black spots are usually dirt clogging up on your screen externally.

Wipe your screen with a microfiber or smooth cloth and then rub it with alcohol to remove any dust and debris. Don’t press too hard on the screen, as this might cause more harm than good.

For Pixel Being Stuck:

If you feel like the problem lies internally in the screen, your best case scenario is that it is due to the pixel being stuck. Gently put your fingers and apply thorough pressure on the black spot of your screen.

By rubbing back and forth, if the black spot starts to dissolve, it usually means that the pixels are getting re-oriented to their former position and you would be good to go by getting rid of black areas.

If the form two technique mentioned above fails, all hope is not yet lost as you can still hope that the black spots can be fixed through dead pixel fixing software which works by firing an array of colors to revive the pixels.

In this case, you can download software like “Jscreen fix” or “Pixel fixer” and run it a couple of times and hope for the best to resolve your issue.

If none of these software sorts you out, then it might be due to a hardware issue inside your LCD or LED of your laptop and you have to take it to your manufacturer to get it fixed.

Pro Tip: Please be advised, never in any circumstance open the screen by yourself as you might void the warranty of your laptop or maybe damage it further.

Can laptop black spot be fixed?

With sheer luck and commitment, you could fix the predicament of having a black spot on your laptop by using a wet microfiber cloth and rubbing it gently on your screen.

It could be literally anything that could obstruct or disrupt the normal function of your screen by producing a black patch, these phenomena include dirt and debris clogging up on your screen or dead pixels due to physical damage.

Physical damage to the screen or improper voltage could cause the dead pixels to appear on your laptop screen.

We all can agree on the fact that black spots are an annoying thing to deal with because oftentimes it is hard to determine the underlying problem regarding a screen malfunction.

But worry not, because these sorts of problems are quiet and are quite easy to fix if you follow the right steps, and most of the time even a dead pixel could be resuscitated through software which is mentioned above.

Just make sure you carefully follow all the steps and solutions mentioned above on how to remove black spots on laptop screens and be wary and not to panic and open your screen by yourself because without ample knowledge you might run into more problems than you can expect.

That being said, I hope I have guided you well and if you still have queries do let me know as I would be much obliged to look into it.