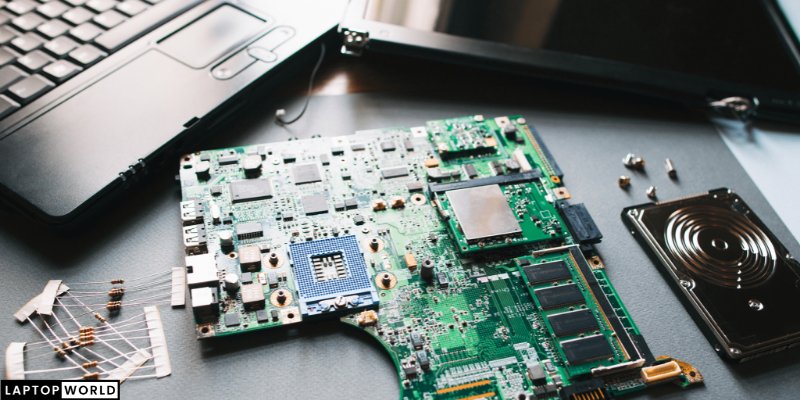 There are three major steps to replace a laptop motherboard.

Table of Content
3 Major Steps to Replace Laptop Motherboard Explained
1. Opening the Case
2. Replacing The Old Motherboard and Installing The New One
3. Closing The Case
Is it worth replacing the motherboard on a laptop?
Can I replace a motherboard myself?
What causes laptop motherboard failure?

However, easier said than done, these steps involve many details that I’m going to walk you through. So, here’s how to replace the laptop motherboard.

Have you tried all of the troubleshooting methods to see where the problem in your laptop lies? I guess so, else you wouldn’t be here. It has come down to replacing the very heart of the machine – the motherboard.

Let’s get done with it.

Step 1: Make sure your laptop is lying on a static surface. The components you’d be opening are all electrically susceptible. You wouldn’t want extra charges to meddle with the functionality of the components you aren’t changing. If you don’t have any static surface, it’s better to use an anti-static bracelet. These are readily available.

Step 2: Unplug the laptop and remove its battery if it is external. If it isn’t, don’t worry as you’d be undoing the back of the laptop anyway. Before that, make sure to remove any accessible components such as RAM, hard drive, Wi-Fi card, and so on. At this point, I’d suggest you should have the manufacturer manual with you just to be sure which thing is where.

Caution: Please be careful when undoing any screws such as that of the hard drive and keep them separate safely for successfully securing the parts in their place later.

Step 3: Undo any screw you see on the back of your laptop. Some will be located on the periphery while others will be below components such as your keyboard. Some models even have screws lining along with the battery case. There are some screws with labels that tell you which component they undo. For example, if you unscrew screws with a keyboard label, that means you’re doing away with the keyboard. First, remove the CD drive if your laptop has it by removing the screws with the CD label, then do away with the keyboard. To remove it, you’ll have to flip back the laptop and use a pry tool. Be careful not to force remove any connection of any component, else you’ll ruin the motherboard.

Step 4: Remove any screws, or connections on the shelf of the keyboard and use a pry tool to separate the palm rest and the bottom.

2. Replacing The Old Motherboard and Installing The New One

Step 1: Now that you see the motherboard, unplug any plugs you see. You have to grab them and pop them out but with no brute force but good grip.

Step 2: Unscrew the motherboard from the case by first identifying them and then removing them with the help of a Phillips screwdriver. That includes screws holding the fan or any other part.

Step 3: All of the USB and other slots come out of the motherboard and into the case. So, do not pull it off. Instead, hold it up from the opposite side and slide it away from the slots.

Step 4: Flip over the board and you should see a lot of important things peeking at you. At this point you should be feeling as if you’re doing a heart transplant because for a computer, that is exactly how it is. The first thing to remove is the CMOS battery. Again, gently raise it with the help of a prying tool. Next, undo the heatsink from the CPU and GPU, depending on the model of the PC you’re using, by removing their screws. The heatsink contains the fan and a few rod-like structures that cover the CPU and GPU.

Step 5: You may also wanna transfer the CPU if it is removable. To do that, simply turn its plug counterclockwise. That will release the CPU. It has unbelievably small pins underneath, so be sure to take care of them. Bending or breaking them will destroy the processor once and for all.

Step 6: Bring in your new motherboard.

Bring in the new motherboard to replace the components and install it in place of the old one.

Step 1: Place the CPU in its new place. As it has plenty of pins, make sure that you place each in its hole before turning the plug clockwise.

Step 2: Put the heatsink over. You may want to first place the rods on the CPU and then GPU before screwing them back in place.

Step 4: Flip over the motherboard and insert it in the case just as you removed it. Make sure you align all the cords and that they are under it.

Step 5: Insert all the screws into the motherboard. You may find them by little arrows near the holes. Next, insert all the plugs back into their places.

Step 6: Place the palm rest back into its place. Apply some force and you’ll hear snapping sounds, which means you’re going the right way. Plug the cables back into it and put the screws back in.

Step 7: Plug the keyboard and put it back in its place.

Step 8: Put back the RAM, hard drive, and Wi-card on the backside of the laptop. Do not screw everything until you start the laptop once just to make sure that you aren’t leaving anything behind.

Step 9: If things are okay, secure all the screws in their original place. Voila! You just changed your laptop motherboard.

Is it worth replacing the motherboard on a laptop?

Yes, given the soaring price of new laptops, you would be better off repairing or replacing the faulty motherboard of your laptop, which can renew your laptop without having to spend as much as you would on a brand new one.

Can I replace a motherboard myself?

Despite the fact that it is a hard feat to accomplish, if you simply take precautions and are careful enough not to break anything, you can replace or change your motherboard.

How To Replace Laptop Motherboard – Conclusion

Replacing the laptop motherboard isn’t hard. Follow the three major steps and substeps to get it done. However, make sure that you take necessary caution such as opening up the machine on a non-static surface, keeping the screws safe and in one place so that you may not lose any, and using only gentle force.