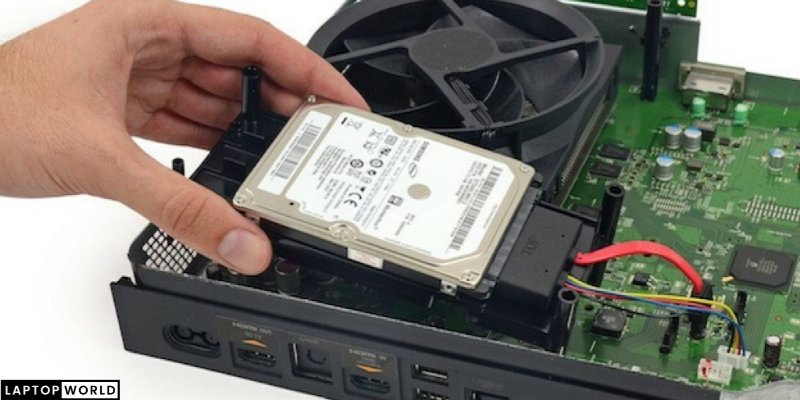 I did say that you need not have any technical prowess to pull this off but you do understand that it’s hard drives we’re talking about. They have file systems. Unfortunately, the Xbox does not accept the FAT32 format. Even if you plug the hard drive with this format, the console is going to take it as a USB storage device. So, you have to format the new drive to NTFS file format.

Here’s how to format the hard drive to NTFS.

Step 1: Insert the HDD into your laptop or PC.

Step 2: Go to File Explorer and locate the HDD. If it’s new, it will have a drive name but wouldn’t show any allocated storage. That is an indication in itself that you need to format it.

Step 3: Right-click on the drive and you’d be presented with a host of menu items. Choose Format.

Step 4: A small dialogue will open which will show the Capacity, File system, Allocation unit size, and Volume label. You don’t need to meddle with anything but the File system. Select NTFS from the drop-down menu. If the Capacity shows exact storage units of the drive then leave it be, otherwise, select it from the drop-down menu. You may have to allocate the same in bytes in the Allocation unit size. Give it a decent name in the Volume label.

Step 5: Check the box of Quick Format and click on Start. The formatting will begin and take a few minutes before you’re able to use it in your Xbox 360 slim.

After that, it’s time to install it inside the console.

Step 1: Unscrew the screws of the Xbox panel until you see the insides.

Step 2: You should see the native hard drive on the side. There will be a small hatch there. Press it to remove the drive. You could also pull it from the side.

Step 3: The drive will be enclosed in a back cover. Unscrew the screws to reveal the real deal.

Step 4: Place the new hard drive in its place. Make sure that it’s a 2.5-inch laptop hard drive and not those big ones because they won’t fit.

Step 5: Simply slide it back in to attach it to the connecting cord. Here, you may face a slight problem. It might fit well but you won’t be able to pull it outward for future purposes. So, what you gotta do is either buy a hard drive cover. It comes cheap and has this small latch at the end that you can pull to bring out the hard drive. Or, you could DIY the whole thing. I had put on a folded cardboard. It was oversized with a small portion sticking out of the HDD chamber. Whenever I needed to remove the HDD, I’d simply pull on the extended cardboard.

Step 6: Screw in everything and run the Xbox. You should see the hard drive as native storage and thank me.

Use an External Docking Station

If for some reason, your Xbox isn’t willing to house the new HDD in its intestines, you could use an external docking station. It comes cheap but you have to be a little expert with a screwdriver.

Step 1: Buy a 2.5-inch external docking station and keep the Phillips screwdriver close to you.

Step 2: Open the docking station and you should see two cables – one for data and another for powering the whole thing.

Step 3: Slide the laptop drive into the station and plug the right cable into it.

Step 5: Copy your game files from your laptop or PC to use later on your Xbox. This method kind of goes around to let you play the games copied from the PC.

Which Hard Drives Should You Use?

I hardly have any favorites when it comes to that. You could use any hard drive of any manufacturer, but it should be a 2.5-inch laptop SATA HDD. None else works on the Xbox. Even this one has a low height as compared to the native HDD of the console. That’s why I included the steps to elevate its height.

How to Copy Your Game Data to Your New Hard Drive?

It’s simple. Connect the previous one with your PC. To view its files, use FATXplorer. Then, copy those files and paste them on the new hard drive. You should be good to go.

Using a “SATA to USB adapter” for your Xbox 360 gaming console will allow you to use your laptop HDD without any compatibility issues. Since laptops have 2.5-inch hard drives built-in, you can use them on your Xbox 360 console like an external hard drive.

For now, only 2.5 inches hard drives with special custom enclosures can only be used to accommodate all your precious games on your Xbox 360 Slim gaming Consoles.

How do you connect a hard drive to an Xbox 360?

Purchasing an external SATA to USB adapter and connecting your 2.5 Inch HDD to any Xbox 360 USB interface will allow your console to recognize it as an external storage drive.

You could easily use a laptop HDD in your console. To do that, first format it to the NTFS file system by inserting it in your PC, going to File Manager, right-clicking the drive, and hitting Format. After that, either insert it directly into the console by removing the native one. But for that, you may have to do some height adjustment. Or, you could buy a USB HDD docking system and plug and play.