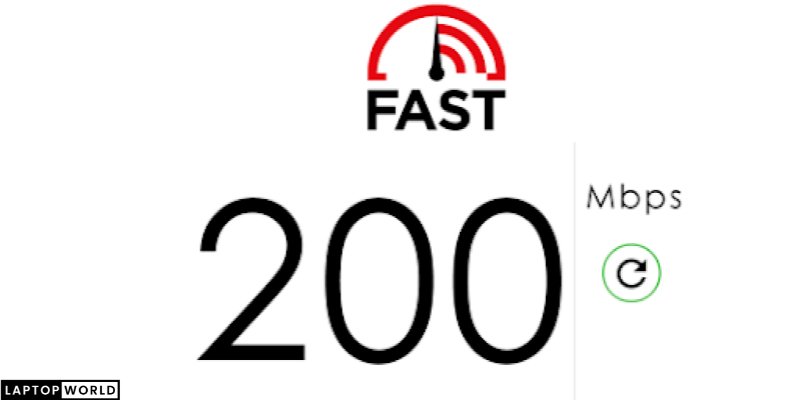 The perfect one-shot answer to the question is: 200 Mbps is surely best for gaming if it’s you alone in the house and there are no further taps on the connection. Otherwise, no doubt you’d still be able to go by and play lots of different AAA games but with frustrating lags and stutters because of the multiple splits midway and eventually a poor upload speed – high latency.

Well, one never-unveiled truth about the correlation between gaming and internet speed is that it’s not the bandwidth but the latency/ping rate that counts the most as for fluid crackerjack gaming is concerned.

So in retort to the queries like what Mbps is required for gaming or is 200 Mbps good for gaming, etc., here is what the pro-gamers say.

Although it seems to be a juggernaut bandwidth for routine household uses, 200 Mbps is not that great for most gaming if (and you must) consider the ping rate. It’s because gaming, unlike other everyday tasks, not only requires a high download speed but the same brisk upload speed as well. And a congested 200 Mbps with so many taps in the house, would never give you that upload speed.

Anyways, don’t be worried as I am gonna cover you up for all these things below in this article.

Contents show
What is This Mbps? Is 200 Mbps Fast?
Mb Vs MB?
Is 200 Mbps Good for Gaming?
What is Ping Rate or Latency?
Unlike Other Routine Internet Uses, Gaming Requires High Upload Speed as Well
Upload Speed
Download Speed
You Might End Up Struggling with the Speeds
What Can Be the Solution(s) Then?
#1. Try A Wired Connection – Connect Ethernet Cable to the Router
#2. Upgrade (or Replace) the Wi-Fi Router
Finish Line

The internet bandwidth is usually the topmost important element when speaking of a broadband network/connection, etc. Bandwidth, in other words, is the download speed/rate of your connection. This acronym Mbps is the measure of the internet’s bandwidth and it stands for “megabits per second”.

Now, is 200 Mbps fast? Of course, it is. Well, before explaining this, let me straighten up one of the biggest mix-ups regarding the two internet terminologies i.e. Mb and MB.

Mb means Megabits, whereas MB denotes MegaBytes, and these are two different things. A byte is a bigger unit of data and is equivalent to eight bits. It means there are 8 Megabits in every single MegaByte. And the higher the Mbps count is, the higher will be the download speed.

Now, a 200 Mbps connection means, if you are downloading something sized 100MB, it will take you only 4 seconds to get that thing into your device. That’s electric fast, isn’t it?

The illustration clearly stipulates that a 200 Mbps broadband connection is, without doubt, super-fast, and it’s, of course, an ideal speed for all the everyday internet needs like browsing, surfing, downloading, binge-watching, etc.

All such routine household activities only include downloading, and there is no, or extremely rare, uploading involved in them. So yeah, being able to download 25MBs of data in just a second is no way less than any triumph.

But such a high bandwidth also falls short of meeting an adept gamer’s speed demands most of the time. How? Why? Let’s find out.

A 200 Mbps speed is absolutely good for almost any online gaming marathon including all FPS, TPS, MOBAs, and RTS games. You can also download pretty much any game with the snappy 25MB/s download speed. But it still isn’t ideal for high-end AAA gaming.

Nevertheless, the connection’s bandwidth is not the most significant consideration when it comes to gaming. Here the most critical thing to watch out for is ping rate or latency.

What is Ping Rate or Latency?

In the easiest possible words, ping rate is the reaction time of your internet connection (it shows how well and stable your connection is). It’s the digital measure of the response time it takes for a message to travel from your computer to a server and back.

Ping rate is also known as Latency and is displayed in “milliseconds”, denoted by “ms”. For super-fluent gameplay, you always need much lower the ping rate possible. And as far as a pro-level gamer is concerned, for him, a decent ping rate means something between 20 to 40ms.

Latency rate, for it’s a real-time thing, can be seen fluctuating with every spike and dip in the internet connection somewhere there on the bottom region of your screen.

Ping can even float somewhere high-up between 90 to 150+ms in case of poor internet connectivity. And while many games can still be fairly playable at 90+ms too, you can’t have their best versions to enjoy. Whereas for a pro-gamer, a ping of just above 30ms can even be noticeable and eventually frustrating.

There isn’t such a difference between ping and latency as ping is a signal sent from one source to another, and latency is the (measure of) time that the signal takes to travel this entire round.

As we’ve got to understand ping and latency, etc. here now we can elaborate why such a high bandwidth like 200 Mbps is still not the best for gaming.

Well, as said earlier, all the routine things you do on the internet mostly revolve around downloading only, and this bandwidth is more than enough for that. But gaming, like video streaming, involves both – downloading and uploading as well. So gaming relies on both the download as well as upload speed.

Upload speed means how fast you can send data from your computer to a server.

During online gameplay, whatever you do like multiple command inputs or other registries, etc. all that means you are sending/uploading some data signals to the server. The higher the upload speed, the smoother the gameplay.

Conversely, download speed means how fast you can pull data from the server to your computer.

Most video game (console) producers recommend having at least 3 Mbps of download speed, whereas at least 1 Mbps of upload speed for online gaming. Obviously, these are the strict minimums, and you must be having something over 30Mbps download speed to have an enjoyable gameplay experience with a passable ping rate.

Well, no doubt this 200 Mbps or 25 MBps connection is way much more than that, and you can be very easily assured that you will neither have any download issues nor any difficulty during the online gameplay.

The real issue would be the upload speed, high latency (in other words), which would spoil your gameplay experience leaving you struggling in a team (multiplayer) game. With each new tap on the connection by your family members, you’d feel both the download and upload speeds getting poorer – whereby the latter getting just worse.

What Can Be the Solution(s) Then?

Well, although I’d recommend upgrading your broadcast plan to at least 400 Mbps for a better gaming experience and to gigabit connections if you want to do streaming as well, still here are a few tricks you can do with your 200 Mbps setup to feel somewhat improved with your gaming speed/fluency.

#1. Try A Wired Connection – Connect Ethernet Cable to the Router

In case you feel like although you are getting the right speeds from your router, still the gameplay is fuzzy and dull, try shifting from wireless setup to wired. Connect your PC straight away to the Wi-Fi router using an Ethernet cable.

You will this way get the quality of your network signals improved and will also keep any unnecessary packet/signal losses from happening anymore.

#2. Upgrade (or Replace) the Wi-Fi Router

Replacing your router to an empty open area can also do the trick and improve the signal power, for we all know Wi-Fi signals hate bumping into obstacles and travel best in an open space. If these fixes fail to work for you, try upgrading your router as the problem might be nothing else but its age.

So, is 200 Mbps good for gaming or not? Well, it’s absolutely good given that you can easily download almost every game, and you can pretty much anytime jump into any online gaming marathon.

The only worry with this bandwidth for gaming is that it won’t ensure that ping and fluidity during online gameplay especially when the connection starts dividing into splits. And not only the latency but the download speed would also get affected with each load-pot on the line. But again, what you’d more notice would be the ping and upload speed making you struggle with a bit frustrating gameplay dullness.

Anyways, worry not if you can’t afford to upgrade your plan for now as this one can still very well make up for all your day-to-day Internet needs as well as a lot of gaming as well.

Scroll up to know other untold things on this!