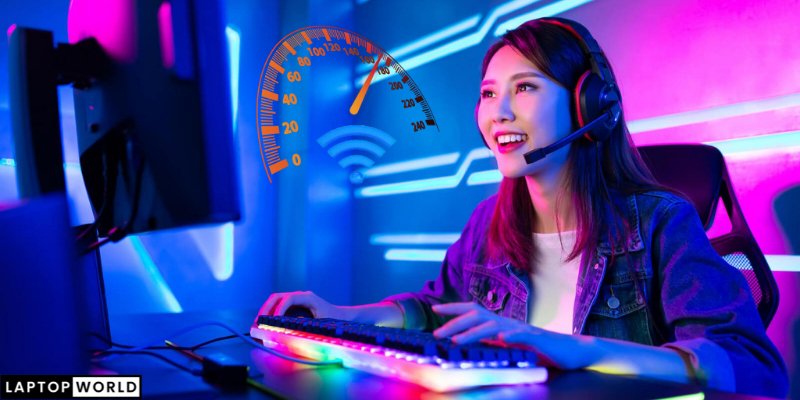 Long gone are the days when gaming was only restricted to offline modes, where you can only venture with your buddies through shared screens or LAN modes.

As technologies have thoroughly advanced, so has the industry of video games where AAA games have started to implement full-fledged online connection requirements even if you want to play a campaign mode of a game.

Me being a gaming enthusiast, I have to be honest here that the answer to your innocent queries is a little complex and needs plenty of elaboration.

But don’t break a sweat yet because I have got you covered as in this article. I will cover this topic as much as I can so you don’t feel like you’re stuck in the grey zone.

Is 400 Mbps fast? Well, before I answer, let’s have a little understanding of internet connection terminologies and what factors play an important role that will negatively and positively impact your gameplay during online sessions.

These are displayed in the form of “ms” which is denoted as milliseconds. A decent ping indicator ranges from somewhere around 20- 40ms, however, if you don’t have a decent internet connection, you can witness milliseconds ranging up to 100-200ms.

Although higher ping indicators may offer a somewhat playable gameplay experience, they aren’t enjoyable and often cause a nuisance as you would have a high ratio of delayed or complete loss of hit registry.

Latency is the data packets sent from your gaming device through your wired or wireless internet connection to the servers that you would be playing on. The ratio of latency depends on how far away the server is located from you. It is directly proportional to the ping you receive while playing your online games.

Playing online games might look straightforward but there are plenty of things going behind the scenes such as the information of your movement and other input being registered and uploaded to the server and the information of other players being downloaded to your device so you can act accordingly.

Oftentimes, when internet connections drop or go bad due to speed fluctuation in uploading or downloading, you might notice the rubber banding effect which is called packet loss.

Packet loss directly impacts your gaming experience and even 1% of packet loss can render your gameplay to a sudden halt which can be extremely annoying because the rubber banding effect is almost instant which makes the gameplay unbearable.

This is the speed of how much data your device uploads to the server. This data comprises your movement registry and other input keymappings.

This is just like upload speed and the only difference is that data is being received from the servers to your device, which is displayed onto your screen.

If either download or upload speed is affected or loses momentum, a phenomenon called lag spike occurs. In other words, lag spikes are massive fluctuations caused by the choking of either upload or download speeds which results in massive game stuttering.

Input lag is the type of lag that is caused due to a delay in response time from your hardware such as a monitor with a lower refresh rate or a mouse with lower polling rates. This input lag isn’t directly proportional to pings, however, it can still impact your gameplay experience.

Is 400 Mbps Good For Gaming? The Straigth Answer

There are plenty of internet providers that often mislead the terminology of MB with MB to trick their users into thinking they are getting higher internet speeds, which is incorrect and borderline a scam.

Let’s calculate how much 400 megabits is equal to Megabytes.

Gaming relies on both upload and download speed and speeds ranging from 30-50MBs are considered more than enough to get a decent ping in online gaming. And if you have a 400mbs or 50MB of internet connection plan, then you can be very well assured that you won’t witness any sort of lag spikes or high ping issues.

However, if you want to stream and play your favorite video games at the same time, then you might want to upgrade your internet connection to gigabit connections which are mainly supported over fiber optics connections as copper wiring often has plenty of noise which directly impacts your ping.

That being said, playing on a wired connection is highly beneficial as compared to playing over a wireless WIFI connection which oftentimes has the attribute of input lag and unnecessary packet loss, so avoiding a WIFI connection for your online gaming session can be the best-case scenario to have a competitive edge over your opponent.

Well, keeping the upload and download ratio constant, I can say from my regular gaming sessions, 400mbs of the internet is more than enough for fluid gaming.

Yes, even in 2021, the majority of internet users tend to have internet speed packages much lower than 400mbps. That being said, in comparison, this makes the above-mentioned speeds way faster even for today’s standards.

There is no difference on which device you play your online games, so whether you are playing on a PlayStation, Xbox, or a desktop with a horrendous internet speed, you might not be having the time of your life that you are supposed to be.

400 Mbps is definitely considered a super-fast connection and will make you forget about loading times ever existing.

You will be able to play on the online servers of Playstation 5 without any stuttering or lags with 400 Mbps internet speed.

How much Mbps do I need for gaming?

You will be off to a good start with a connection of anywhere between 5-10 Mbps, but if you want maximum performance opt for fiber optics which will give you the lowest pings.

But still, if you are short on budget and the 400mbs package feels viable under a decent price to value ratio, then fret not because it is more than enough for your everyday use as well as for your gaming sessions, but try to get fiber optics if possible so you can reap as many benefits as possible.