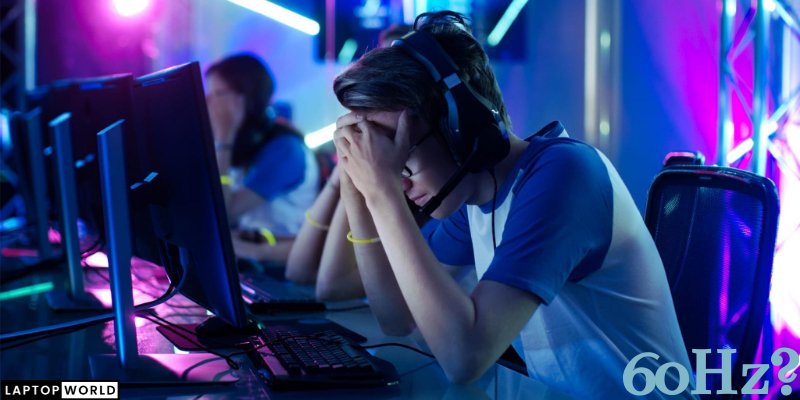 The genre of high-speed action-packed games is no doubt loved by almost everyone around the globe, whether it was our old school first-person shooter games such as IGI or QUAKE Arena, these games had no doubt got us glued to the seats for countless hours.

However, as the technologies behind the internet bandwidth speeds got much more mature over time, developers saw an opportunity to expand their game to the online player base so they can compete in a player vs player mode(PVP).

But internet speed isn’t the only thing that would be necessary to play games with buttery fluid momentum as you would be surprised to know how much refresh rates in your display do matter.

If you aren’t familiar with what frame rate is, you are pretty much rocking a 60hz refresh rate screen and a question might pop up in your head “is 60hz Good for gaming”?

I have to admit, it is without a doubt an innocent question, however, the answer to it is much more complex because in some cases 60hz refresh is more than enough while in some scenarios it barely scrapes the bottom of the barrel.

Before we dive into the rabbit hole, let me get you familiar with a couple of things

What Is Refresh Rate?

In simple terms, the refresh rate or Hz of a display monitor is the images per second you see on your screen. As you know the logic behind a video being processed is through the binding of images which moves so quickly that it becomes a motion video.

So for a 60hz refresh rate display, it means you would see 60 images per second that move in order to deliver you a valid output.

As per standard, nowadays the cheapest LED or LCD monitor you would find does have a 60hz refresh rate screen and some would argue that it is more than enough since the eye can only see 60hz and beyond that, those frames do go to waste.

But that is novice talk from someone that hasn’t basked in the glorious 240hz refresh rate gameplay. But let’s not jump into advanced things so quickly,  that might confuse you.

What Are Frame Rates?

Frame rate is the number of images that are captured by your hardware such as your graphics, RAM, and processor. These are solely dependent on the hardware you have on your desktop or gaming console.

Gaming consoles tend to be locked at certain refresh rates such as 60hz because of hardware limitations and lack of upgrading features, however, desktops don’t have any sorts of limitations because they can be upgraded as much as your budget allows.

Is 60hz Good For Gaming?

Getting to the question of the day, well honestly speaking, if you are rocking a mid-tier PC then think much about refresh rates and hertz of a display because as long as you are getting stable frames and don’t feel anything choppy, even 60hz is enough for you in single-player games such as Far Cry 6, Assassin’s Creed Odyssey, Doom Eternal, and Cyberpunk 2077.

I would also argue that the 60hz refresh rate is also pretty much playable in multiplayer games, but let me tell you that you would have a drastic disadvantage over your enemies.

And playing games Like Counterstrike Global Offensive, Rainbow six siege, Call of duty Black ops Cold war warzone will feel a lot harder since you would lose plenty of gunfights if your opponents have better refresh rates than you.

Moreover, the input lag is also very noticeable especially if you have turned the VSYNC option on.

Given how much resources 4k gaming or 3840 x 2160 pixel requires, it is no doubt that reaching a stable 60hz is an achievement in itself and even the most high-end pc tends to break a sweat when doing so.

However, thanks to features like DLSS 2.0 and AMD Fidelity FX, you can push your hardware to limits to upscale your images to achieve 60hz requirements at 4k gaming.

Henceforth, 60hz in 4k gaming is more than enough even if you are playing multiplayer games, however, I wouldn’t advise you to play multiplayer games on such high resolution because it has an almost theoretical advantage over the lower resolution with higher refresh rates.

Personally, I loved playing Red Dead Redemption 2 and Witcher 3 on a 4k resolution which gave me a jaw-dropping experience that I wouldn’t have gotten otherwise because the scenario was so mouth-watering it felt like true to life, especially in Assassin creed Valhalla which gave me extreme goosebumps while jumping from the highest cliff.

The hardware specifications of gaming consoles are very much to blame for limiting the refresh rate. Consoles typically have a fixed rate of 60Hz.

On the other hand, in the newer generation of consoles, like the PS5, things have started looking up for console gamers, as they can now enjoy games at 120hz and all they need is a display that supports 120hz.

In conclusion, although I would say for single-player games like Spiderman Miles Morales or Uncharted 4, 60hz gaming is more than sufficient to quench your gaming thirst but for multiplayer games like Fortnite, Destiny 2, and Apex Legends, there is no reason for you to opt-out for 120hz refresh which will give you a significant advantage in the battlefield.

Is 60Hz fast enough for gaming?

60hz refresh rate is considered horrendous for gaming, especially if you are playing fast action paced first-person gaming because those input lags will hamper your experience.

Gone are the days when 60hz was considered normal because nowadays, the sweet spot for refresh rate ranges from 120-144hz for joyful gaming.

Since, gaming relies on beefier graphics cards and 4k resolution requires much more computational power than 1080p resolution, a 60hz refresh rate can be considered serviceable.

So to summarize all this, for single players having a 60hz refresh rate is more than enough and you wouldn’t need any noticeable changes or advantages if you have more than a 60hz refresh rate monitor, however, for multiplayer gaming, the input lag would deliver a very hindering experience to you.

So if you are a hardcore gamer, get something beyond 60hz like 120hz or 144hz so you can enjoy your multiplayer games and win those close-quarter gunfights efficiently.