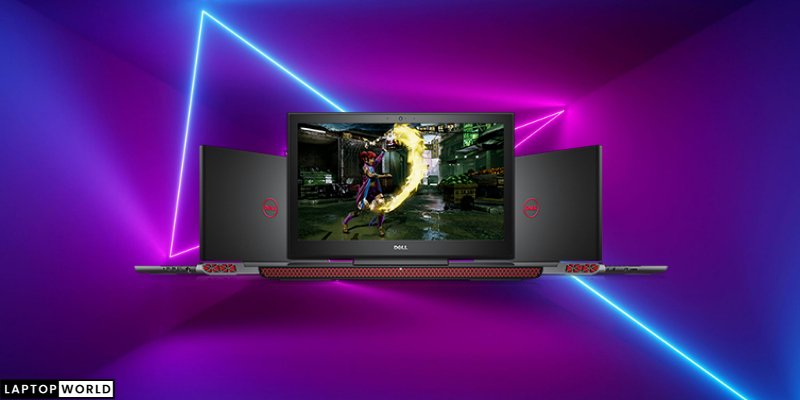 The Dell Inspiron lineup is more of a mainstream laptop lineup by the brand. It caters to the needs of students, teachers, and all other everyday laptop users. But unlike the Dell Alienware or G series laptops, Inspiron laptops are not built with much gaming in mind.

That being said, it’s still never curt NO to the question, is Dell Inspiron good for gaming. Yea, some laptops in the line like a few different models of Inspiron 15 3000, 15 5000, 7000 are some of the good mid-range gaming solutions in the stretch.

Given this, some of these laptops even boast discrete GPUs. Although those chipsets are just barely better than the processor-integrated graphics setups, you’ll feel a plus at both – your routing working and some lighter gaming as well.

So yeah, if you are not a hardcore gamer and looking for just a solid regular laptop, Inspiron has lots of options for you. Inspirons, like those mentioned above, offer you that edge that when you get tired of your daylong work, you can kick back, launch a game, and have some me-time too.

So, Is Dell Inspiron Good for Gaming or Not?

Well, my ultimate say on this is gonna be something like – get a Dell Inspiron for gaming only if you are a non-gamer. But if you are a gamer thinking of an Inspiron as your next gaming laptop, just brush your thought off.

Still, let’s check out how those handful of gaming laptops in the Inspiron stretch are doing both in terms of specs and hands-on performance as well.

These laptops usually come with 7th Gen 4-cored CPUs (both Intel and AMD), 8GB built-in RAMs, and mostly 256GB SSDs. Regarding GPUs, some of the 15 3000 laptops feature Iris Plus (integrated) Graphics, a few come with RX Vega 8 while some even pack up to 1050 and 1060 GPUs.

So yea, looking at the Inspiron 15 3000’s on a broad scale, it’s clear that you can’t stress these machines for some serious gaming. But you can definitely enjoy some light to mid-range gameplay here.

Although this laptop also comes with 8GB RAM from the manufacturer, there is an improvement here with storage – it has 512GB of built-in SSD. Yeah, 15 5502 packs no discrete GPU chip and features the integrated Intel Iris Xe Graphics setup.

Seeing the hardware configuration in 15 5000s, again, you can easily say that, yea, these laptops are also good for some mild gameplay only – on low settings in and out the game.

To hit upon a definite answer to the question “is Dell Inspiron good for gaming?”, I’ve tried some of the above-cited Inspirons with a few massively played (and loved) computer games. And here is how the laptops performed when being put to test.

Note that below given is the gaming performance of Inspiron 5502. Of course, this laptop has no dedicated GPU, unlike most 15 7000 series laptops, but the processor here is way better (in terms of clocking speed, cache memory, and hyper-threading) than the processors on those 15 7000 laptops. So I suppose this is an average performance throughout the Inspiron gaming lineup. Still, results can vary with the laptop (series) model but hardly any, I believe.

Whereas on the native resolution and the same low-medium settings, the FPS drops even below 20. And you hardly get an average FPS of over 12 or 15 max.

If you want to play high requirements games like Warhammer: Chaosbane, League of Legends, Civilization 6, Red Dead Redemption, Call of Duty, etc., you’d need to switch down to extremely basic settings. And still, perhaps, you won’t have a pleasant gaming experience overall.

So again, get an Inspiron for gaming only if you rarely launch a game; that to just take off your work’s boredom. And if you don’t care much about display classiness, FPS flow, and ray-tracing things, etc.

But if you are a serious gamer, search somewhere else.

Reasons Why Are the Dell Inspiron Laptop(s) Not Good for Serious/Hardcore Gaming?

The Inspiron stretch by Dell, as mentioned time and again, is kind to almost every computer nerd with some best solutions for everyone but unfortunately, not gamers. And that’s ok because Dell takes the best care of its gaming-mad commune with its Alienware and G-series juggernauts.

Anyways, let me list down a few key reasons why Inspiron is not a gamers’ lineup.

Looking at the overall hardware configurations, you can, of course, go and game on many Inspiron laptops. But to be honest, the GPUs in these laptops are not any good for serious gameplay.

These are just some run-of-the-mill chips best for lighter everyday graphics-hungry tasks. Whereas for gaming, you truly need a top-of-the-line discrete graphics setup as graphics is the undisputed king when it comes to gaming.

The display quality at Inspiron laptops, ugh, that’s just not justifiable for gaming. No doubt the resolution is Full HD across the Inspiron lineup – especially here, the screens are still extremely sub-par (for a gamer).

Let me take the Inspiron 15 7000 as an example. The display here is extremely dull and dumb with no gaming-adjusted brightness and no color accuracy either. When gauged, the display’s color coverage showed up just 61% of the RGB color gamut. Bear in mind, that I am talking about the best gaming solution in the Inspiron line.

Dell Inspiron 15 7000 is a perfect head turner so far as its thick red minting and badass red-backlit standard-sized keyboard are concerned. Yea, it has a bold red keyboard with a pretty cool and deep key-travel. You have got that distinct numeric pad as well.

But the keyboard, overall, is not that fine for gaming. The key caps have got a somewhat sticky-like, sort of awkward texture, which is not really a gamers thing. Besides, it’s not anywhere near to that gamers-cherished mechanical keyboard.

The touchpad also shows the same texture all around, and you pretty much feel like it’s so unresponsive. And I know how dreadful this unresponsive word is for a gamer.

Final Thoughts – Should You Buy a Dell Inspiron for Gaming?

So, is Dell Inspiron good for gaming? Yes, laptops like those from the Inspiron 15 3000, 5000, and 7000 lineups are some good well-rounded mid-range gaming options. If you are in search of a solid regular laptop where in case of the mind’s collapse (due to 24/7 work) you can have some blow-out too, do check out the Inspiron 15 7000 range.

Although Inspiron is not Dell’s gaming lineup, the brand deserves a special shout-out for releasing some solid yet economical solutions for casual gamers. For the price tags, the laptops in these three Inspiron stretches are just superb robust machines not only for demanding non-gamers but casual mid-range gamers as well.

But yeah, Inspiron is not a go-to laptop line if you are a high-end hardcore gamer looking for a killer gaming laptop. There are no seriously gaming-grade machines here.

Furthermore, if you are a casual but graphics-intensive gamer, you too must not go for an Inspiron laptop for gaming. The screens on these laptops are just sub-par for the purpose. They are neither sharp nor accurate at colors and not perfectly bright either.

That being said, Inspiron laptops are still great on-budget gaming solutions for every mid-range gamer.