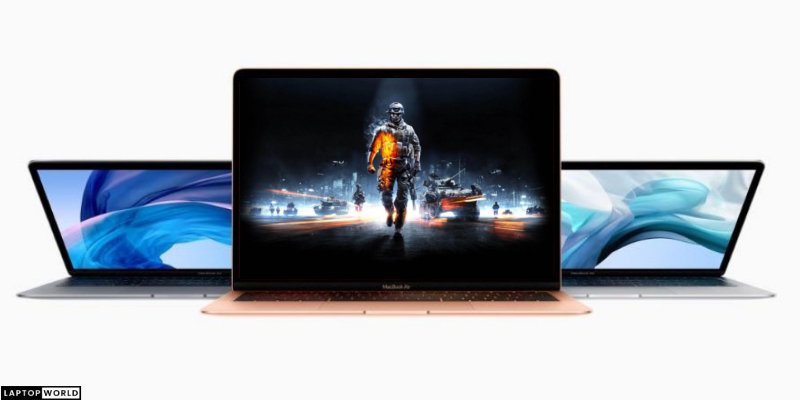 Recently, I received an interesting question. Let me share it with you. The question is “is MacBook Air good for gaming“? Since I have been thinking about this question for a couple of days, I sat down today at my Macbook and started to write this awesome piece that would be helpful to people like you.

MacBook(s) and gaming, these two have never been on good terms with each other. Because Macs are majorly aimed at professional people. They are built with a focus more on program optimization and not on sore hardware vigor – needed for gaming.

And then MacBook Air(s) for gaming, uh, get one only if you are a non-gamer who hits a game just by chance at leisure.

Yeah, a MacBook Air is never considered any good for that unwavering gaming. You can certainly play games on it – lots of modern games too but on low settings. You can go on a race for new titles. But honestly, you cannot satisfy your gaming craves with a Mac Air.

There are tons of reasons for this. And I know you are here to get a detailed insight into all this. Now let’s examine all the YESES and NOES regarding whether the MacBook Air is a good gaming laptop.

Is MacBook Air Good for Gaming? The Truth

Well, before straight away saying “Yes” or “No” to the question, I’d better give you a rush through how M1 Air is doing with gaming on the whole.

It’s no secret that graphics is the king when it comes to gaming. Given this, the Mac Air 2020 packed with the revolutionary M1 chip boasts an 8-cored GPU and up to 5x faster and improved graphics performance. But, to be honest, that’s more of a brag only.

Let me explain it.

To test the MacBook Air’s gaming performance, I put it to test with some of the top-of-the-line mac-optimized games. And there were just a very few games where I got the desired results without sacrificing graphics.

Otherwise, the need to gear back the graphics settings to let the game run is, sort of, mandatory here. Anyways, here’s how the Mac does with all the different types of games that you can play on macOS.

When tried with a few of those top games you can play on a Mac, here’s how this one got by them.

But if you play the game on lower resolutions, say something like 1650×1050 or even lowest i.e. 720p. Then you’ll get the FPS of over 120 on the lowest settings and near to 90 on the highest. That said, the performance varies with your settings both in and out of the game.

Seeing all these results, one thing is for sure Mac Air performs very well with all the AAA games too, if you are kind with the game settings (and screen resolution too). Otherwise, for a ruthless and performance-hungry gamer, it’s not good.

Games Where MacBook Air Does Well

On the contrary, there are a few games – I’d better call them MacBook Air games, where the machine is doing quite well overall.

And these are no other than Apple’s dearest Arcade games i.e. Oceanhorn 2, Mini Motorways, Alba, and a lot more other ones. These just run excellent on Mac Air 2020.

Except for them, if you want to play all the other Silicon-optimized games, you’d need to temper your expectations. If you stay kind and mild to the settings i.e. on the medium (better lowest) screen resolution and games settings, there is no excuse your Mac won’t run them.

Well, we have still not arrived at a proper close regarding “is MacBook Air good for gaming?”. So let’s go a bit more deeply into it.

Is the New MacBook Air M1 Good for Gaming or Not?

All things considered, I can confidently say NO. M1 Mac Air did run all those mac-optimized games, but from a gamer’s viewpoint, it didn’t perform that well overall. So, no, it’s absolutely not a go-to option for those serious gamers.

Yeah, you can surely go for it if you are not much in that AAA gaming. And you just casually sit back and launch a game to relieve your work fatigue without paying any heed to those ray-tracing, FPS, DLSS, and likewise things.

So, let’s finally check out the reasons for Mac Air doing not so well in terms of gaming.

So, I am confused about whether to call them – the reasons for Macs’ gaming incompetence, the cons, or not. Whatsoever, here’s why MacBook Airs aren’t any good for true gamers.

For AAA-level gaming, a dedicated GPU is, sort of, a must. That said, you won’t find any serious (discrete) graphics setup in a MacBook Air.

Although the M1 Air 2020 flaunts an 8-cored GPU and almost 80% improved graphics performance. No doubt keeping your eye off the flawless retina display is also impossible.

And that’s why this graphics setup comes classy enough to make visuals appear truly eye-satisfying on the screen. It’s still not a gaming-optimized configuration – it’s perfect for other works, but you can’t stress it much for gaming.

Another key reason for most of the M1 Macs being not the best for gaming is a very less number of perfectly Silicon-optimized games.

Most of the games there are developed for those x86 (32-bit) and x64 (64-bit setup) platforms. Although a lot of them have now been ported to the Apple Silicon, they are yet not fully optimized for the platform.

Whereas most of the games are not even postured to this new setup. That’s why you can’t think of playing every game on an M1 Mac.

Most of the latest MacBook(s), especially M1 Macs, now features novel fan-less interiors. No doubt this innovation has completely redefined that serenity and noiselessness during use, but it’s somehow mean too.

Although Apple says that the Silicon setup is way powerful and can stay ideally cool under some harsh loads too, still, you need to be careful with it. Sure you can launch a game and play it to the fullest. But as soon as you go a little extra grievous, you start feeling that bad burn.

So you would either have to play the game on the very basic settings or just give it a break very soon.

Although it seems not a critical thing, it matters a lot. Unlike the gaming-adjusted/full-sized, and, sort of, mechanical types of keyboards, the Macs’ keyboards are not perfect for acute gaming.

The keys here appear more chiclet, and the key travel is way less. That said, the latest Macs don’t feature that dross butterfly mechanism but rather the scissor mechanism keyboards. They are still not the gamer’s things at all.

Is it worth waiting for the 2022 MacBook Air?

Macbook Air 2022 could have a refined version of the M1 chip or even the M2 processor that takes things to the next level and makes the wait worthwhile.

Is MacBook Air OK for gaming?

A dedicated graphics card and a multicore processor are required to ensure the best gaming experience. Due to its 60Hz display, the MacBook Air is not suitable for gaming.

Is the MacBook Air a touch screen?

There is no touchscreen on the Macbook Air, however, the touchpad is amazing enough to make you forget about the touchscreen.

So is MacBook Air good for gaming? Well, yeah, but to a very small extent. Logically, I’d say the answer is less of a YES and more of a NO.

Look dude I have mentioned this time and again that Macs are not designed for gaming but businesslike efficacy. These are, sort of, mobile workstations with no gaming-ideal ancillary hardware potency.

Nonetheless, you can use them for part-time gaming. You can run almost all the mac-optimized games on a MacBook Air while staying on low settings. And the new M1 MacBook Air 2020 is stealing the limelight with its way better performance in this regard – casual gaming.

Yeah, you can’t stress it with those premium and demanding games. But if you are willing to sacrifice your graphics craves, there is no chance M1 Air will disappoint you.

Lastly, if you really want to make a Mac your next gaming machine, try the 16” MacBook Pro. It does not pack the M1 chip but rather comes with an Intel Core i7 9th Gen CPU and features a dedicated GPU. Compared to all the MacBook(s), this one will quite finely satisfy all your gaming craves with its brilliant overall gaming performance.

I hope you find it helpful!