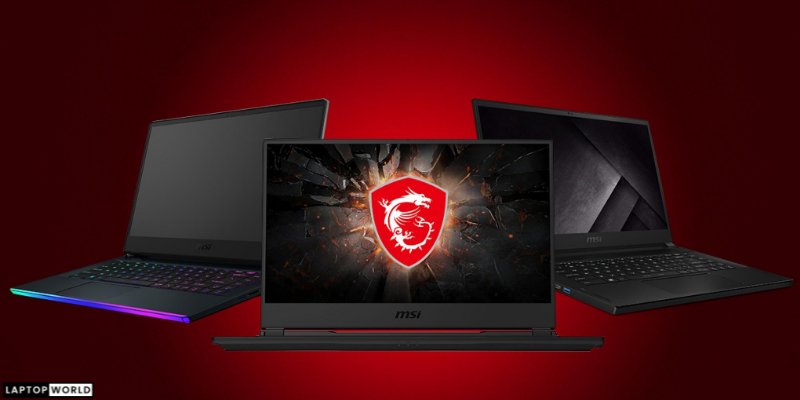 MSI is, without question, a great brand for laptops. The company specializes in producing some high-end machines mostly aimed at elite gamers and content creators, etc. MSI is considered a maestro at putting some deluxe hardware in its laptops, especially video cards.

Needless to mention the elite laptops, if you even go for a normal one (just a good laptop) at MSI, you’ll presumably get a stellar graphics card, and cream hardware across, vis-a-vis to your bucks.

The brand has done nothing but soared high in the gaming and eSports market. Up to a point, where it’s now almost dominating the gaming laptop industry. And all this, in just a beyond compare period of 8 to 10 odd years.

Seeing all these things, it’s gonna be a whole lot of fun to explore the brand’s journey, its boom, and burgeoning in the (gaming) laptop-PCs industry.

What is MSI? Who Makes MSI Laptops? – A Bit of Brand’s Background

The term “MSI” is the short form for Micro-Star International – a Taiwanese multinational IT corporation. Micro-Star International, like ASUS, is a tech and IT giant headquartered in New Taipei City, Taiwan. The company was founded in August 1986 by five consorts namely Joseph Hsu, Jeans Huang, Frank Lin, Kenny Yu, and Henry Lu Qilong.

The company originally started as a motherboard and video cards manufacturing enterprise. And, that ultimately led Micro-Star International to enter the gaming PC market and make some truly high-end gaming laptops.

Is MSI A Good Brand for Laptops?

My answer in this regard would edge towards a big “yes”, if you are a gamer, a content creator, a businessperson, etc. And if MSI is somewhere roaming in your mind for your next laptop purchase.

On contrary, it would be a “No”, if you are a non-gamer looking for “just a good” laptop for your routine day-to-day computer needs.

So, let’s get down to discuss both these “yes” and “no” parts in all the needed detail.

According to all the sources – online and offline, public reviews, etc. here are all the things that the brand is doing well at.

The company doesn’t have a much extensive variety of laptops but what it has in its offerings is a peerless value (and variety) for all elite laptop nerds.

MSI is best known for its two laptop ranges, both being the ultimate solutions to all the needs of that target market. These include the MSI’s Gaming (G) Series and the MSI Creator Series.

Besides, the brand also covers the needs of businessmen and other professionals via its top-notch business and productivity-class laptop ranges.

Let’s go for a postmortem of the MSI’s laptops offerings.

MSI’s gaming-class laptops series is further carved up into:

This shows that there is a wide variety even within the single “Gaming laptop” term. Each release is aimed at the needs and wants of a specific gamers’ split. Well, a few other gaming laptop ranges include the “Delta”, “Alpha”, and “Bravo” lines of MSI gaming laptops.

The creators-focused laptop lines include MSI’s “Workstation” series and “Creator” series. These laptops boast some healthy specs and powers just at par with the needs of a high-end content creator of every type.

And yeah, most of the company’s these class laptops are also up and coming at getting full-star ratings just like the company’s gaming laptops.

The company’s three noted laptop lines aimed at the professional non-gamers needs i.e. for businesspersons and other such professionals include the MSI “Prestige” laptop line, “Summit” series, and “Modern” laptop series.

The laptops here feature some fine office-friendly builds, graded specs, are easy to carry, and are completely at par with a professional’s personage.

#2. A Reliable Name for Laptops and Notebooks – Gaming One Especially

As of April 30th, 2019, MSI pocketed the title of being the most reliable high-tech brand in the (gaming) notebook and laptop sector in Europe. According to stats, MSI has also been reported the world’s largest supplier in the gaming notebook market, if not the largest, it’s for sure one from the list.

People often ask the question, “are MSI laptops reliable?”. The answer is that the company has been awarded the “Most Reliable Laptop Brand” title in 2019, by UFC-Que Choisir – a French consumer organization.

So, that survey done by the organization regarding the MSI brand’s reliability proved to be the most authentic reply to the question. And one authentic stamp on MSI’s trustworthiness in terms of laptops, etc.

Whatsoever type of laptop you go for in the MSI’s domain, one thing is for sure that you’ll witness the finest forge. Yeah, it is difficult to find an MSI laptop with a price tag lower than $600 or $700.

But, the one you get here always features cream-class hardware throughout i.e. a top-notch CPU, a graded GPU, and good RAM/SSD duos. In short, everything is first-rate except for the battery. You can simply not expect a better battery stand than this i.e. 2 – 3hr at most (while under loads) and 4 – max 5hr (under normal use), in an MSI laptop.

One universal fact about this brand is that, at MSI, a dedicated graphics setup is sort of a must. Ranging from the gaming-grade NVIDIA graphics in its upper-tier machines to simple Radeon graphics in the entry-level ones, you’ll find a dedicated GPU in an MSI laptop.

#4. A Perfect Balance of Minimalism and Glamour

At MSI you won’t find that much diversity in terms of design and looks of laptops. The company is said to put almost the same i.e. simple, sleek, and minimalistic designs in all of its laptops.

Although there do exist loads of gamers and creator machines with premium aluminum-clad builds. That said, the company’s businessmen/professional people-oriented laptops mostly come in decent office-friendly looks.

In short, at MSI, there is a great balance between minimalism and glamour. Most of the laptops here never show that frippery, fanciness, and unusual miens, yet look soothing to eyes.

The brand falls in the pink category when it comes to the company’s inclination towards novel concocts. MSI has documented some novel practices in its machines in the past and, yea, it’s not getting, anyway, torpid in the department.

Some of the noteworthy innovations at MSI laptops include a try at upgrading the battery capacity to up to 99.9Whr level (which is the craziest for a gaming laptop). Besides, the company has also launched the world’s first mini-LED screen in one of its Creator’s series models.

The company also takes the credit for introducing mechanical keyboards into its laptops. This is one smashing try to take laptop gaming, even more, closer to desktop-class gaming.

That said, most of the brand’s ultra-stellar laptops feature some ultra-snappy screens featuring up to 300Hz refresh rates.

And, there are a lot more other things on the list too i.e. the MSI APP Player (to run android games on laptops), MSI Ambient Link (to sync PC’s RGB lighting with the game’s theme), etc.

This shows that the company has the guts to futureproof its brand name and its machines.

#6. Praiseworthy Warranties and Other Coverages

MSI is well known for backing its laptops with some decent warranty terms and conditions. Most of the laptops here come with 1 to 2 years of hardware warranties.

Besides, what gives a clear edge to MSI is that it’s the only company that also offers additional things like a one-time free accidental-damage (repair) coverage, etc.

Although you’d have to bear any shipping charges, etc. yourself in case you happen to send/receive your laptop to/from the company. Still, the brand is considered teeming in this department.

A few reasons why I think MSI is not a go-to laptop brand are given below.

This thing has already got multiple mentions above that MSI is an elites-oriented laptop brand. Be it the gaming laptops stretch of the brand, or the creators stretch, or even the professional people-oriented laptops, all are aimed at affluent patrons.

As mentioned earlier, it’s almost impossible to find a laptop in the MSI arena with a price tag of < $500, even $600, or $700. This makes the brand inclined towards a particular market and takes it far down from being called a mainstream laptop brand.

#2. Lack of Variety in Designs

At MSI, as I said earlier, there is no such diversity in designs, etc. Almost every laptop of a specific stretch demos one specific, sort of similar, design and appearance.

Although there are some tries to bring great, eye-catchy, and all-embracing designs in the brand’s catalog too. Still, it’s one known thing about MSI that, most of the time, you’d come across some twin form factors.

Just like most of the other PC brands, it’s sad to see MSI in this list too. Yes, the tech and after-sale support in the MSI arena, too, is just pathetic. The company’s website is quite intricate to stroll within. Its social media presence is almost flunked where one gets a reply after days of waiting.

That said, it’s also nearly impossible to catch up with the company’s representative on phone. If you luckily manage to do, you’ll often get misguiding answers and suggestions. In a word, MSI is just down and out in terms of after-sale tech and customer support.

Is MSI a high-end brand?

MSI Technologies are unmatched when compared to other brands in the industry due to its cutting edge products with high-end specifications, making them one of the most out-of-this-world brands.

Is MSI popular in India?

In South Asian countries like India, where laptops and other multimedia devices are highly demanded, MSI holds substantial market shares. MSI has a wide selection of laptops available for its customers, so the company can easily be considered a go-to choice for anyone searching for a decent laptop.

Is MSI good for a long time?

It is MSI’s custom to release their laptops with the highest specifications so that they last as long as possible without going obsolete due to outdated hardware or software, so it’s safe to say they can definitely last long.

In conclusion, I will sort of recap and sum app all that’s said and done in a few lines. So, the thing was to discuss the MSI brand’s laptops. And to come up with an appropriate answer to this frequently asked question, “is MSI a good brand for laptops?”.

I did a lot of comprehensive research on that and, yea arrived at a consummate answer finally.

Hence I can say that this is one of the best brands for laptops. A good brand for you only and only if you are one of those really high-end users of laptops i.e. if you are either a pro-level gamer or an upper-crust content creator.

MSI is a brand, that produces majorly some top-notch exclusive laptops displaying some stellar specs, especially video cards. You can easily witness all the needed laptop diversity – in terms of price, performance, and portability factors, in the brand’s domain.

They produce some simple yet exquisite and aesthetically good machines. There are no such crazy designs and the minimalism here is actually the glamour.

The only flaw is that it’s not an all-embracing laptop brand – not in terms of quality but price tags. It’s an elite type of brand and not for some budget-conscious patrons.

So, that’s what the summary is. Rest, there’re a lot of other things about the brand and it’s this specific product stretch discussed above.

Scroll up. Give it a read!