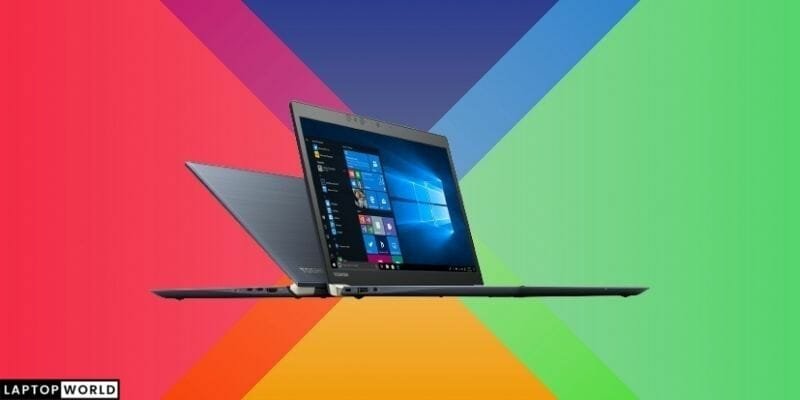 Toshiba pockets the honor of being the world’s first-ever brand to produce and release a portable computer – a laptop. And it was T1100, the world’s first laptop, released by the company in 1985, in Europe.

Being the pioneer of portable computers, Toshiba in those early years stood out and tall in the PC industry. The company released some seriously great and in-budget machines. And, “Toshiba laptop” was, without doubt, a household term, high and low.

That being said, today, there is almost no room left for Toshiba in the laptop market to stroll around and be noticed, literally. Toshiba is no more a good and healthy brand for laptops.

Anyways, there are a lot of things that you ought to know, beforehand, if you have the Toshiba name in your mind for your next purchase.

And I’m happy you landed here. Because here is all you need to know regarding the Toshiba brand. Regarding its stretch in the PC industry. Regarding “is Toshiba a good brand for laptops or not?”. And a lot more.

So, let’s get to it now. But, first, let’s check out a bit of the brand’s history and background, etc.

Toshiba is a Japanese multinational conglomerate corporation headquartered in Minato, Tokyo. The company was founded in 1939 as a result of the merger of two companies, Shibaura Seisaku-sho and Tokyo Denki. At that time, the company’s name was put Tokyo Shibaura Denki K.K (Tokyo Shibaura Electric Co., Ltd).

It was in 1978 when the company’s name was officially changed to “Toshiba Corporation”. A tech and IT company basically, Toshiba is said to have multiple business schisms i.e. the Digital and Electronic Products split, the Home Appliances split, and the Social Infrastructure group.

That said, there are lots of other things in Toshiba’s offerings too i.e. social and industrial infrastructure systems, household appliances, etc., medical, office, and other equipment, and lighting & logistics, etc.

Well, as mentioned earlier, Toshiba takes the credit for being the pioneer of portable computers. The company had completely reshaped the computer industry with its first laptop release, in the mid-1980s and had snatched countless acclaims at the time.

Toshiba held a stubborn 5th position in the global PC market share (by unit sales of PCs) for some 7 odd years i.e. from 2001 to 2009 (nonconsecutive). It remained the world’s fifth-largest PC vendor, (in terms of revenue) preceded by HP, Dell, Acer, ASUS, and Lenovo.

By looking at these stats only, one can easily edge towards “Yes” i.e. Yea, Toshiba is doing well in the computer industry.

But, things are at odds in reality.

From having such big titles on hand, Toshiba has gradually come to a point where it has now resigned from the PC industry.

No doubt, the company is still one of the world’s top 100 largest corporations, but its part in the computers market finally came to an end in late 2020.

And “No” to the likes of these questions i.e. do Toshiba still make laptops?

As of August 2020, the company has resigned from the laptop industry. Toshiba has discontinued producing computers, at least producing under its brand name.

This means, as of writing this article, there is no fresh update, and any release(s) made before August 2020 is the brand’s most recent laptop release(s).

Point is, discussing the brand’s worthiness or unworthiness with regards to its PCs matters little now. Because Toshiba has just abandoned this personal computer line. But, anyway, here’s my touch on it.

Is Toshiba a Good Brand for Laptops?

In all honesty, “No”. Toshiba is not considered so well-off a brand in terms of computers. Although, just like any other brand, Toshiba also has a wide range of “very good” and “not so good” laptops. And that’s indeed something normal.

It all depends on you as to how generous you go to a brand’s arena. If you are ready and willing to fritter bucks, you’ll, of course, get the same value in return. And vice versa for the other case. So, it’s not the brand but you who has all the checks.

Still, there are a few things that account for a brand’s reputation in that specific provision line. And, here they are for Toshiba laptops, discussed briefly.

The “Yes” Part – Reasons Why Toshiba Brand is Good for Laptops

About the positives of the brand concerning its machines, here are a few reasons I found regarding why one ought to go for Toshiba for laptops.

#1. Vast Array of Laptops – Something for Everyone

The brand, despite being quite ill-starred for all, has a pretty extensive range of laptops. The company has well-tried to do good to professionals, businesspersons, gamers, and students, etc.

It does have Chromebooks in its offerings too, thus aiming at the needs of those entertainment geeks. You can also find lots of 2-in-1s and convertibles in Toshiba’s arena. You can easily find everything here i.e. ranging from a < $300 Chromebook to an $800-$900, up to a $1500+ machine.

Well, some of its widely known laptop lines include.

One most noteworthy plus you can get at Toshiba is the brand’s care for its low-budget customers. If you are someone low on cash but looking for a decent laptop, you can perhaps find some very good options here as compared to other brands like HP, Dell, etc.

That being said, an in-budget laptop here may be expensive than some other brands’ in-budget ones i.e. Lenovo, Acer, etc. Still, the price and performance (value) balance at the low-end laptops is pretty well in Toshiba’s domain.

One known thing about Japanese products is that they last longer and longer for years. That’s so true for this beast brand too, not only in terms of laptops/computers but everything.

Anyways, be it the external resilience or the internal robustness, if you get one, it would be just immortal and imperishable. No matter how harsh you deal with it, you’ll, still, easily manage to have it beside you for years and years.

And that’s a tried and true, universally acclaimed, fact.

The “No” Part – Reasons Why Toshiba is Not Good for Laptops?

I tried my level best but could not find any other legit reason, with could help edge the decision towards “yes”. So, let’s now check out the downsides of the brand.

First on the list of cons comes the fact, that a Toshiba laptop comes shedload with bloatware from the company. So much that you’d literally want to go for a complete rinse of your brand new laptop.

Because otherwise, it would offer you not that space and memory that you expect from that machine. And, that may not work for you either.

Toshiba is never a go-to laptop brand for you if you are someone madly conscious about looks, designs, and charm in your gadgets. And that’s it.

Although there are some laptops here, which feature aluminum-clad builds. But, the thing is that at the looks/charm scale of 1 – 10, Toshiba perhaps lies somewhere at or below the poor extreme.

Yeah, the designs are not horrible here, but they are not premium either. Besides, most of the Toshiba laptops display bulky builds. Notwithstanding, the brand does have lots of ultraportable computers too, but that’s what a general perception is about the brand.

Unless and until you are not a diehard fan, I would suggest you never fall for the brand’s name. Must go for thorough research on the laptop, etc. you are planning to get.

Not literally but it’s one known fact about Toshiba that its laptops, unless-n-until they are not purely elite, come quite mediocre throughout.

That said, if you pay heavy bucks, you’d get a good value. Otherwise, it’s just fine hardware for a more than average payment at Toshiba i.e. not a well-off business for you.

The company is just terrible in terms of its warranty and repair terms and conditions. You often get no or just one-year product (hardware) warranty here (not sure, but that’s perhaps because Japanese products are believed to last for longer terms).

That said, if you happen to go for some mends and repairs and send the product to the company, chances are that you yourself will bear all the shipment, etc. charges. Because that’s what I’ve heard from most Toshiba customers.

Just at par with most of those other well-reputed brands i.e. HP, Dell, ASUS, etc., the after-sale tech support at Toshiba is also sub-par.

Although the company has (had) fine phone support with two phone lines i.e. a toll-free number and a priority access way, the support is just mediocre. Besides, the company’s online presence i.e. website, etc. is also not that intricate comparatively. With that, their social media presence is not so good.

In short, the after-sale customer/tech support is part good but more of it pathetic.

The company has never focused much, I’d say not a little, on trying some innovative things in its machines. It falls nowhere but on hard rocks when it comes to introducing some novel features, etc. in its laptops. The only try Toshiba did was instilling some of its 2-in-1 laptops with up to 4K displays and pack them with touch-pens (styluses).

Otherwise, there is no such thing that could make the brand stand out of the crowd except for the company’s trying to produce some in-budget though average or above-average machines. So, this’s what you can include in the list too. Period.

The diverse variety of laptops, named above, aimed at the needs of a specific audience, shows that the brand does had/have a solution for every kind of computer nerd.

But, still, I’ve found only a below-average rating, far and wide. This indicates that none of the brand’s laptop range has so well performed in its target market as compared to other laptop brands. And, that’s why the company often comes at the cellar.

Is Toshiba or HP better?

As compared to Toshiba, HP tends to have a better market share, and it has a wide range of laptop models that cater to the majority of the market, unlike Toshiba, which has a limited number of laptop models.

How long do Toshiba laptops last?

Toshiba laptops usually last for around 4-5 years before their batteries wear out, which is the main reason why laptops become obsolete and outdated.

Do people still use Toshiba laptops?

As of 2016, Toshiba has stopped manufacturing its new line of laptops and given up the competition. Despite this, refurbished Toshiba devices still exist, but new ones are hard to find.

Finally, done! I think this is more than enough about the Toshiba brand. More specifically, about its one product stretch i.e. laptops.

The thing was to answer this one question i.e. whether or not, is Toshiba a good brand for laptops? And, I am more than sure that this article is one consummate answer to the question.

To recap, I’d say, Toshiba is one beast of a name in the tech and IT world. You name a tech tool or kit, and chances are that the company’s already dealing in it. It’s, without doubt, a big name in the tech world.

But, Toshiba has never done that well in the market. And, that’s why you could always easily find alt ways to skip its computers. Needless to say, the company has some big titles on hold, but still, it could not manage with the competition and departed.

I hope that’s temporary, but that is the fact for now. Why? How? What? Etc., etc. I’ve discussed every single thing about the brand’s whip and whisk in the PCs market.

Scroll up. A lot of information is waiting for you!