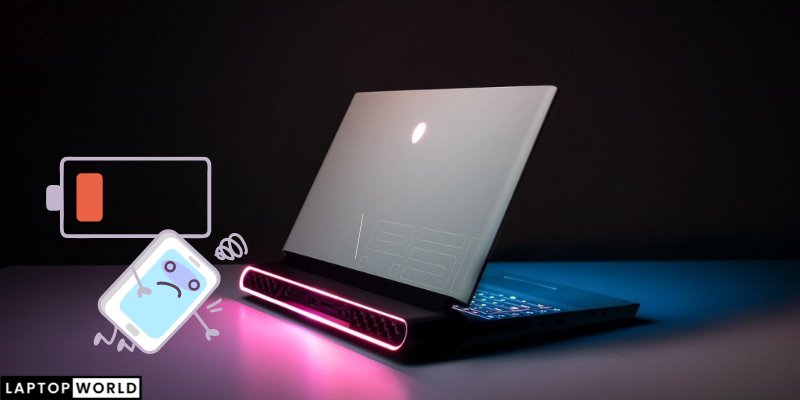 Laptop and desktop are usually the same in all aspects, however, the only thing different is the portability aspect which isn’t present in a traditional desktop.

However, as laptops are meant to be portable so you can carry them everywhere you go, it is a common misconception that a gaming laptop doesn’t do well in that department and people often wonder why do gaming laptops have low battery life?

The answer to your question might not be as simple as you think because there are plenty of factors that come into play that reduce the runtime of a battery, which makes the average battery life of gaming laptops roughly around 2-3 hours which is below satisfactory.

Let’s take a look at the brief breakdown of the factors that might be the culprit.

Reasons Why Do Gaming Laptops Have Low Battery Life?

The problem lies in the internal components of the hardware you are investing in, a gaming laptop tends to have much more robust and bigger hardware components, and other special features are often missing in a traditional laptop which is given below.

As the software and gaming requirements have been peaking their limits with the advancement in technology, the processing demand is no doubt increasing. And in to produce ample clocking speeds of processing power, the manufacturer tends to produce laptops with higher core count processors.

These higher core count processors with even higher threads like Ryzen 9 5950x which has 16 cores and 32 threads to consume a jaw-dropping power of 105W TDP, which strains the battery life a lot and drains it in a couple of hours.

Just like the processor, a dedicated graphics card is also equally necessary to run your favorite triple-A games without compromising in frame rates and feeling any stuttering. To deliver such massive frame rates, dedicated graphics cards like AMD 6900XT tend to suck up all available power at their disposal to work overtime to deliver you the best gameplay, resulting in even shorter battery life.

Gaming on smaller resolution and 60hz locked refresh rates is boring as it feels very laggy in online competitive gaming.

In order for you to have an edge over your enemy, the necessity for higher resolution to give you a bigger field of view, as well as a higher refresh rate over a turning corner, is very much needed but you have to take that into the account that these elements drastically consumes more power straining both your CPU and graphics card in the process which results in low battery life in a gaming laptop.

When you pay big bucks, it means you are getting a premium grade deal with lovely features likes keyboard per-key RGB customization with multiple zone colors as well as other aesthetics enhancing features like logo illumination to make you look trendy and fashionable in your gaming league.

However, all these goodies can cut your battery in mere hours, and play a major role in drastically reducing the portability ratio.

All that heat generating from high power consumption will go nowhere if there is no sizeable ventilation system.

Gaming laptops usually have more than 1 ventilation fans which are uniquely tuned in correspondence with the power profile that adjusts their Rate per minute(RPM) to dissipate unnecessary heat.

As the RPM increases the power requirement or TDP of the fans also increases, further draining the battery life even faster.

The sixth reason why do gaming laptops have low battery life is their slimmer batteries. This one might be the most overlooked variable, but nonetheless, it serves as a real culprit behind gaming laptops with insignificant battery lives.

Although these factors are almost inevitable to cope up with, there are still some tweaks that you can do to increase the life span of your lithium batteries, some of which are:

To save up some battery life so that your laptop survives a little longer, turning down the notch of keyboard backlighting might be the best option on power conservation, especially during the daytime where you don’t need it the most.

Almost all gaming laptops have uniquely designed software that you can use to tweak, monitor your hardware temperatures as well as power consumption.

Tweaking the base clock of your graphics card and processor well below the maximum frequency can do wonders in saving up battery juice, however, you might experience some frame throttling in your games.

If you arent playing multiplayer games, higher frame rates arent even necessary so it is better advised that you reduce your frame rates to a minimum of 60hz where you can enjoy fluid gameplay without straining your battery cells.

One of the most viable options to reduce power consumption is going through the windows power profile where you can choose from the power plans depending upon your requirements.

Although by default there are only three power plans which are:

The power saver option is the best to conserve battery life. However, you can make or customize your own ones if these aren’t favorable for your needs.

Why do gaming laptops have less battery life?

Laptops for gaming, in particular, are much more power hungry than the conventional laptops that you might be using in your daily life, so their battery life feels shorter.

How long should a laptop battery last while gaming?

Gaming is definitely power intensive, isn’t particularly battery friendly, and can cause a significant amount of stress on your lithium-ion cells, so you can expect run times around 3-4 hours on a good day.

Does gaming damage a laptop?

So that’s about it, these are factors that heavily affect your gaming experience and after reading the article you now have the answer to your question as to why do gaming laptops have low battery life.

Go ahead and carefully read the solutions to counter the battery problem you might be facing to gain an upper hand in your gaming hours.

Feel free to comment below if you have any questions.